What Lays Beneath? Atlantis Ring 3

In a previous article on the third Atlantean ring we examined the chemistry, repeated motifs, potential origins and the shared place of discovery (Hill End NSW) for both Atlantis Rings 1 and 3. What was intentionally kept separate was any mention of the academic ‘elephant in the room.’ We believe that this ring, just like the first ring, is bound in and surrounded by magic of the very highest pedigree.

Having made that mystical declaration, we are aware that our many critics would ridicule us for promoting such a non-scientific “airy-fairy”(1) concept. They would insist what lays beneath and within this ring is not magic but purely a figment of my overactive imagination, a fantasy at best, and others would descend further insisting this is all a lie meant to manipulate the gullible and naïve for personal gain and fame. That is their story and one we will not pass judgment upon, but what we know to be true is that Atlantis Rings 1 and 2, along with quite a few rings from Lemuria are indeed magic. That has been witnessed by us and many others, often. Some rings have a chequered past and have been often misused, but to begin all these ancient rings were made by an ancient alchemist with the best of intentions.

Tolkien was correct in nominating three Atlantean rings and the associated powers, but alas not so in assuming one ring was made to be manifestly evil in every inclination and situation. Atlantis Ring 3, along with the first ring, has been cut and remodeled after it was created. The incision here is even more severe than the first, and unlike the earlier ring, it is now clearly unbalanced and unsequenced. If both manifestly irregular alterations took place at some time after the rings were first made, it seems logical to assume that in their pristine uncut state, both rings could have carried a more benevolent and positive nature. 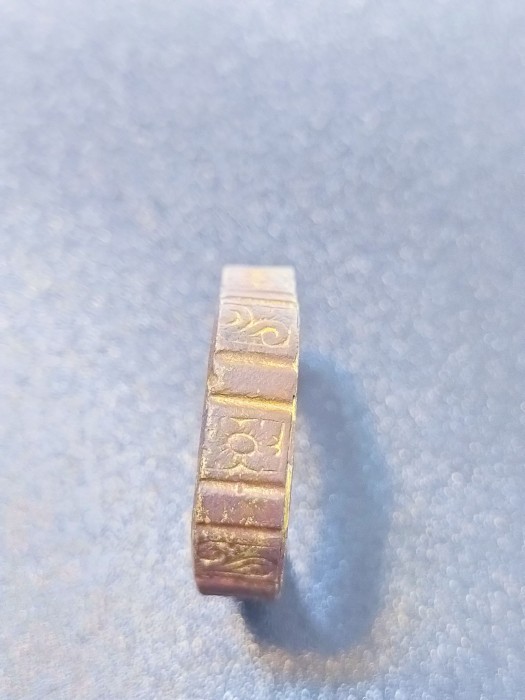 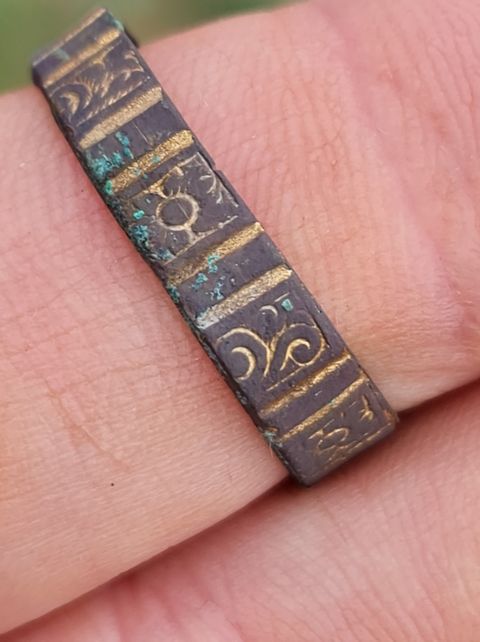 It had been our approach when dealing with these rings, to keep the surface and science separate from the esoteric qualities and energies each ring possesses. This is done not through any doubt held on our behalf, but solely due to making sure any critic can not mix and match, using any magical qualities as a ‘smokescreen’ in obscuring all the proven empirical evidence. The problem we had when prosecuting this ring’s factual credentials was that on the surface, we have been forced to make two entries. The ring itself is, with the one small rectangular exception that the person who found this ring rubbed off, coloured a dark brown.

However, when placed under the light of one lamp, the brown literally vanishes, and the entire package takes on a uniform golden glow. The point being, the ring still looks the same brown colour, but it is only when the photo is taken and developed does the colour change. Even though the earlier introductory report solely makes mention of the coat of brown, the photograph is entirely golden. As much as I wanted to add some sort of explanation, knowing any account would be mystical in complexion and be prefaced by the claim that this ring glows when placed in the dark, it was decided any explanation was held back, until now. What can be confidently stated is that the brown coat is neither a patina or natural, but an artificial and sophisticated addition.

Whether the photographs sent in previous emails, or the first time I actually saw and held this ring, my expectations as to what the inner qualities and magical capacities of this ring are has never varied. It was my belief that not only was this ring and Atlantis Ring 1 found at Hill End five years apart, they have the same two motifs identical in setting and quantity and close to the same make up in chemistry, they also share the same sinister and negative magical energy. This foreboding of more of the same malicious intent was a dismal introduction. The erratic sequencing, asymmetrical alignment and obvious tampering of this ring did nothing to allay my concerns. However, in the mystical realms on a good day my talents barely exceed that of a novice, and in that pursuit, we have two of the most advanced psychics on this planet to consult when dealing with such an enigmatic talisman.

We have no intention of justifying or explaining how both Mary and Solreta ply their mystical trades, all we know is that both have never been wrong, ever. And we are way past harbouring any doubt, simply because neither of them had given an incorrect reading. Equally, before this reading neither person had met or spoken to each other, and nor was any prior knowledge given of this ring or what the other person had sensed and understood. Out of earshot and sight, each of the two readings occurred with no prior clues about the subject or the other person involved. Clearly, we did hope for some degree of agreement, but never like this. What they stated was well beyond coincidental, seven times over.

Before highlighting the seven areas of shared qualities and inclinations, what did seem to happen was that Jane seemed to be centring on the first ring-bearer, while Solreta appeared to be tracking its entire earthy journey and the multiple human hosts who held this ring over the centuries. Apart from adopting different viewpoints and timing, nothing else was different beyond slight variations in grammar and mathematics.

That is an imposing list of less than desirable attributes and objectives, no less menacing than the other two rings and if it wasn’t for the fact that both readers insist I could “clean”(25) this ring, the temptation to file and forget would certainly be a consideration. However, as it is with all three of the Atlantis Rings, they contain the full magical package, good and evil at the elemental level, but held without discrimination or compassion.  With Atlantis Ring 2 adopting a more conciliatory and enlightened stance, the same routines and rituals will be given to this ring, but I sense the damage is deeper …

At the base level, all three Atlantean rings carry a copper/zinc load of around 99.5% supplemented by something akin to three homeopathic drops of nickel, iron and lead/or a lead substitute. At the esoteric level, these rings are full of magic and driven to possess any that place the ring on their finger. Yes, it all sounds so much like it was taken directly from the pages of Tolkien’s fictional trilogy about three rings, but there is more to this tale, beginning with none of this is a fictional construct, but completely factual.

And more importantly, Tolkien’s ‘fantasy’ trilogy is complete and has a conclusion. This evolving ring-narrative is barely past the introductory stage and is lacking in a script writer or director.