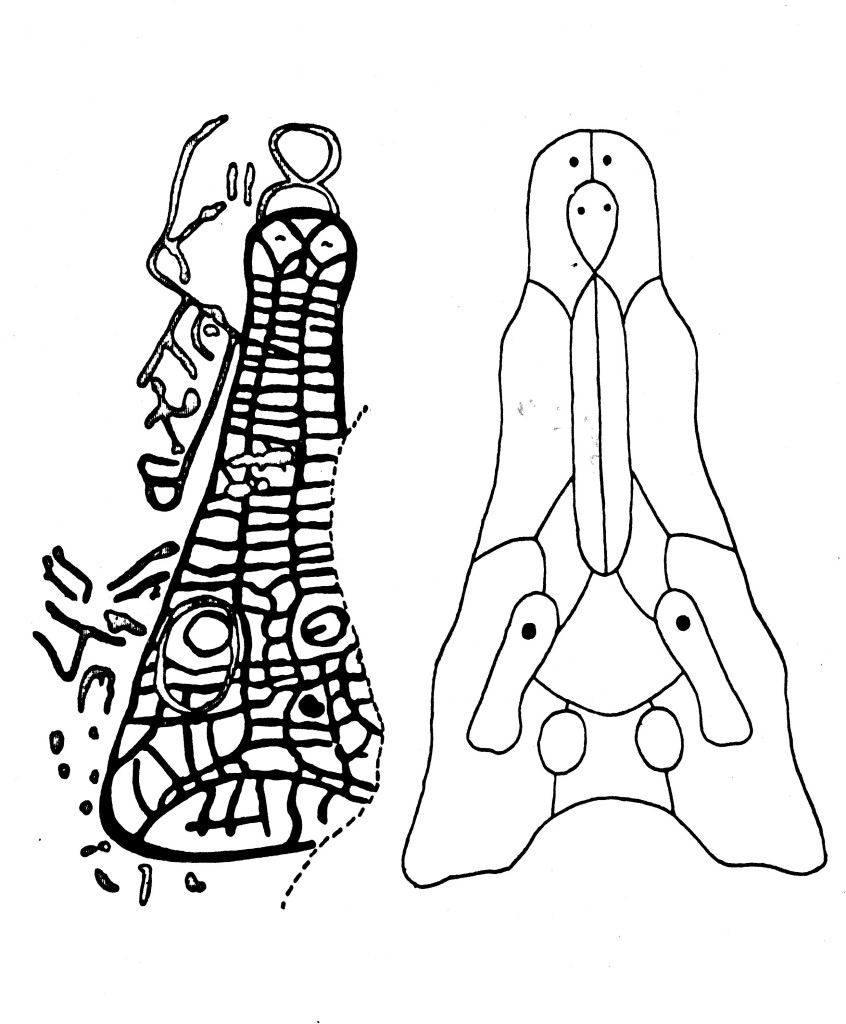 There is an agreed ancient artistic style that has spread throughout Australia which is referred to as the Panaramittee tradition. What is not in agreement relates to what these symbols and glyphs mean and the locations outside this country that are latter-day replicas of this ancient art.

At some time no earlier than 75,000 years, artists near Lake Eyre (South Australia) were engraving the features of a crocodile into rock. Originally discovered in 1923, not only is this a work of considerable artistic merit, according to eminent archaeologist Josephine Flood, “I am going so bold as to suggest that it they derive from a time where terrestrial and humans actually co-existed in South Australia, although the youngest crocodiles found so far date to more than 75,000 years.”

Not only is that date close to 50,000 years earlier than any form of art found anywhere else in the world, it doesn’t stand alone. Also discovered at Panaramittee was another set of engravings which were dated by Dr. Donald Dorn through assessing the cation ratio, to be older than 43,000 years old. But what needs to be factored into this ancient assembly is that these engravings are not merely crude illustrations of the local flora and fauna.

Often taking on the form of a narrative, those adept in ancient lore can most certainly read between the grooves. Les Wilton, whose grandfather was one of the last to live a fully traditional life, learnt all he could from his kin, and is one of the very few able to decipher these shapes and glyphs. One engraving at Olary (which is close to Panaramittee and of that style) has the outward appearance of four simple circles of varying diameters, with one line intersecting. In Les’ eyes, it describes how three

tribes argued with another, with the group furthest to the right offending the other three, and thus responsible for the dispute. In European eyes there are four circles and a line, end of story.

These ancient sites, and many others, bearing identical motifs and symbols are spread throughout the country, and led Lesley Maynard to conclude that not only was this the oldest example of Homo sapien art, but the base and origin upon which all forms of writing and grammar evolved. As expected, the academic climate in Australia did not take kindly to such nonsensical notions, but fortunately one professor saw merit in her observation and came up with an ingenious, and slightly devious, ploy to assess the bona fides of Maynard’s theory. Professor Bednark sent suitably qualified scholars around the world photos of ancient glyphs inscribed into rock, situated in Africa, USA and Europe, Bednark deliberately left aside every Australian location from this portfolio. In what surely confirmed

Maynard’s suspicions, 98% of the respondents nominated the place of origin of all the photographs submitted to be Australia.

The results were so uniform, and percentages so large, Bednark was left with two options. “It is either not possible to identify the Panaramittee style, or … this is a world-wide style.”

But there is more, not just the syntax and symbols that underpin the written word and narrative was exported from Australia, but the actual spoken word is part and parcel of this ancient Australian package.

At the very turn of the 19th century, the German anthropologist, Dr Hermann Klaatsch, introduced the notion of on-field intensive study to the universities of Europe. To launch this radical concept he embarked upon a three year investigation (1904-1906) into the lives of traditional Australian Aboriginals. Convinced it was from Australia modern man first evolved, and as

a consequence, art, religion, language and the more refined pursuits, he spent his time gathering evidence that he felt validated his theory.

He was particularly taken by the striking similarities between many Aboriginal dialects and European languages. What stood out, even more so for those whose native tongue was German, were the Aboriginals of Western Australia. So obvious was the link to the German language, the Lutheran missionaries were originally at a los to fathom how this could be. Their explanation, as provided by Klaatsch, was naïve but did serve to illustrate how strongly the two languages melded. He noted that “according to the missionaries it was the confusion of the tongues at the Tower of Babel that cut off the ancestors of the Australians from other races.” Somewhat patronising, Klaatsch explained why he included this commentary when noting that as “childish as these ideas are, they are of value in some respects, as they give us an

impartial testimony to the Indo-Germanic affinities to the Australians.”

It would be a mistake to assume this linguistic connection applies solely to the German language. Klaatsch was particularly interested in establishing a commonality between the most basic words. Simply because the need and frequency of the most pressing objects and emotions logically lead to a situation where these ideas and things would become the first words created. And it was here at the most primal level the links were strongest.

“The Latin acqua, the English “water” (British and Irish ‘usk,’ and German “wasser” etc) which remind us of the constantly repeated “arra,” “warra’ and “larra” of the Australian dialects … The word “manda” (=hand) for instance, is found over a large area, and recalls the Latin manus … No less striking is the resemblance of “bina” (ear, leaf, feather) to the corresponding Latin word pinna. In Queensland I found the word “jepar” for

liver, which in greek is “hepar’: and Bradshaw, an authority on the Australians, gives “kaputa” for “head” (Latin caput) as used by a central Australian tribe.”

This small sampling is sufficient for our purposes, but slightly misleading in one regard. Klaatsch was focussing on confirming the undeniable affinities to European language, Professor Elkin wasn’t seeking any linguistic link, and he was having more than enough trouble making any meaningful verbal contact. Elkin, who soon after was appointed to chair the first anthropology faculty at Sydney University, was trying to communicate with Aboriginals from the Kimberley region who had never made direct contact with any non-Aboriginal people. After exhausting his large reservoir of neighbouring dialects, the impasse was broken when these illiterate naked hunter/gatherers “used ancient Masonic hand signals … many of the words were of Egyptian origin.”

With the origins of readin’ and ‘riting addressed, there still remains the third “r,” ‘rithmetic. One would expect, simply because Aboriginal counting stops at four or five, that this is the one academic field where looking somewhere else would be more fruitful. Ignoring the obvious reality that maths is much more than counting, Hermann Klaatsch made note of yet another similarity when examining the most basic numbers, one and two. “These are found in all dialects … the words for one and two (“unnar” and “djakala”) have certain amount of resemblance to the Latin (una and duo).

Of course, these connections through language do not stand in isolation. The same story is repeated whether examining mitochondrial DNA, Y Chromosomes, blood groupings, skull morphology, Dreaming stories, historical records and accounts given by Aboriginal custodians of ancient lore. It all began in

Australia, and as reminded by an Elder versed in past, if “all other people of the world come from us,” then so too does language, religion, art, sailing, surgery, and the essential notions of gender equality and democracy. The rest is history.