Cultural genocide is alive and well in Australia. As of July 11th, the Ramindjeri people of Kangaroo Island will be evicted from their Culture Centre and instructed never to return. This sacred place, known as the Gateway to the Heavens, is an elemental part of the fabric of Original Spirituality and Culture, and will cease to exist once they are forced off their land.

In what only compounds the offense, the prior arrangements made with the Ramindjeri people, that would have seen the sensational Original star rocks collection being displayed at the Culture Centre, is now in jeopardy. These rocks show absolute evidence of incredibly advanced technology operating in Australia in ancient times, and is an important part of the Original people’s history. This is not the only case either. We are getting reports that several other tribes are facing similar injustice.

This collection of rocks will be on display at the meeting to be held at The Irish Club in Adelaide on Saturday 30, to present the circumstances surrounding this tragic turn of events. We will also present an amazingly different version of Original history and archaeology, which not only rewrites world history, but was inspired and directed by the esteemed Ramindjeri Elder Karno W. We ask that you come along to support the fight against this injustice. 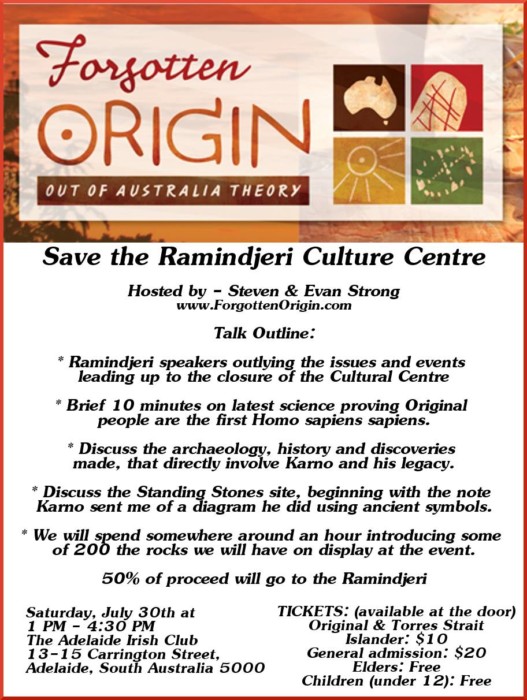