Putting all the Pieces Back Together: Australia’s Stonehenge

We are utterly convinced that the Standing Stones complex is the most important archaeological site in Australia, if not the world. Acclaimed as the “oldest temple in the world”(1) and location where language, culture and esoteric wisdom began, this place demands to be recognised as a national treasure. Alas, that has not happened, simply because without the appearance of the actual rocks that once stood on the main mound and the hundreds of inter-connected stone arrangements, it seems the authorities will not act.

That was then, not now. With the strong chance the larger rocks taken from the principal mound have now been located, the most impressive feature that must be addressed relates to the tonnage and size of individual rocks. The only certainty found within the logistics of extraction, transportation and placement of thousands of tonnes of basalt on the mound in ancient days, is that such processes sit outside the reach of any mainstream historical version of pre-Cook Australia. Any explanation for what is now revealed in such unexpectedly huge dimensions must include metal blades, sophisticated means of transport, pulleys, wheels and all manner of supposedly exotic devices operating in a land of sticks and stones. 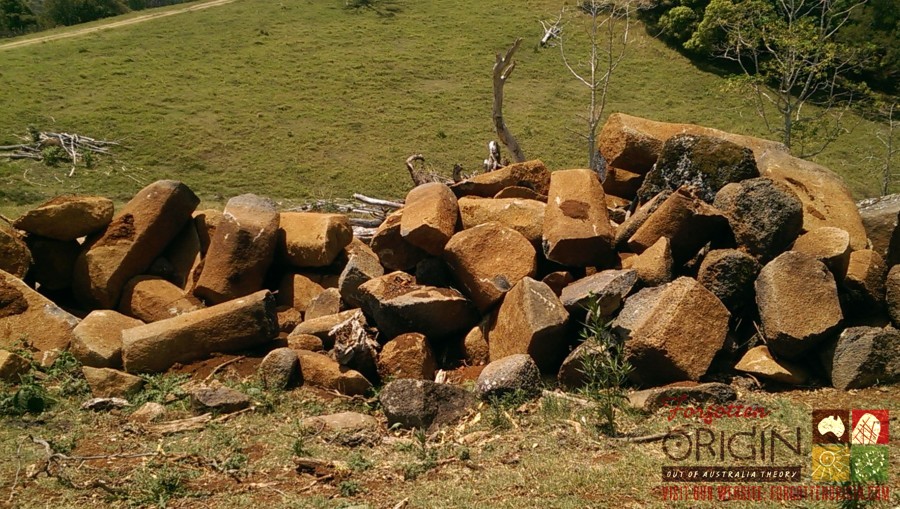 The current archaeological stock-take includes knowledge of where the mounds, surrounding grounds and many of the smaller and larger rocks now stand, lay or are stacked, the map of the 184 Standing Stones, name of each rock and the translation, and most importantly, the Dance of the Stone Arrangements (“Story of Life From Birth to Death, Told at Ritual of High Degree”(2)). It would seem that with all the missing and hidden ingredients now back on the same table, everything would easily fall into place. If only!?

The present owner of this former quarry, now rural subdivision, purchased this property some thirty years after the rocks were dumped and covered in soil. He mistakenly believes that the rocks are all natural deposits found within the upper three metres of top soil and refuses to enter into any further discussion. Unless an impartial geologist can examine the sites and formally dismiss this response as a geological impossibility, we are stuck on square one with no prospect of moving forward.

Until that impasse is formally resolved there is no second step. In the meantime Original and non-Original people with blood ties, knowledge or skills that directly assist will convene and set out an agenda and future plans. As important as this gathering is, it must be remembered that there is a more important agency involved in this sacred transaction: the Guardian Spirits of that holy complex. Make no mistake, there are fully engaged and active, in the ascendancy and must be obeyed. To that end, they have already clearly defined the first step in this journey, and it belongs to the women.

The women buying the block, upon which the rocks once stationed on the main mound most likely now reside, have been extensively liaising with Original Elder Louis Cook, Jingki and other women who have set up the Lennox Head Woman’s Centre based on Old Way Original principles. Hunwi first saw twelve standing stones positioned along the old quarry road while inspecting the land she is co-buying and immediately realised their immense significance. They returned soon after with Lois and others to find the rocks were no longer standing, but in their place the top soil directly above was uncovered and the rocks hidden for over sixty years ago now uncovered, ready to resume sacred duties.

It is our opinion and agreement that because these women had abandoned the trappings and attractions of today’s decaying society through reinstating an Old Way lifestyle and philosophy, they were chosen by the Spirits to resurrect, nurse and care for these special rocks. It is a marriage made by the Spirits between rocks and women which no man can caste asunder. Nor will we, because of their choice and affirmation given from the protectors of the rocks and holy site, it is agreed that until these rocks are moved again to resume their rightful place of the mound, they are the prime custodians of the rocks stored on their freehold land purchased through withdrawals made from personal funds. The rocks themselves belong to no person or committee, but until their return that arrangement is right and fair at every level and sanctioned from above.

The women will care for rocks that are touching and stacked at the time of writing, this is a very bad state of affairs and has to be resolved immediately through separation so that they never touch again, ever! The blade marks on many rocks, some that have been broken into sections and the cuts and bruises needing a women’s hand, are but some of the symptoms caused through burial and blade. Smoking and healing ceremonies have to be given before they can be moved back to the temple that initiated the spark that led to the ascension of humanity. 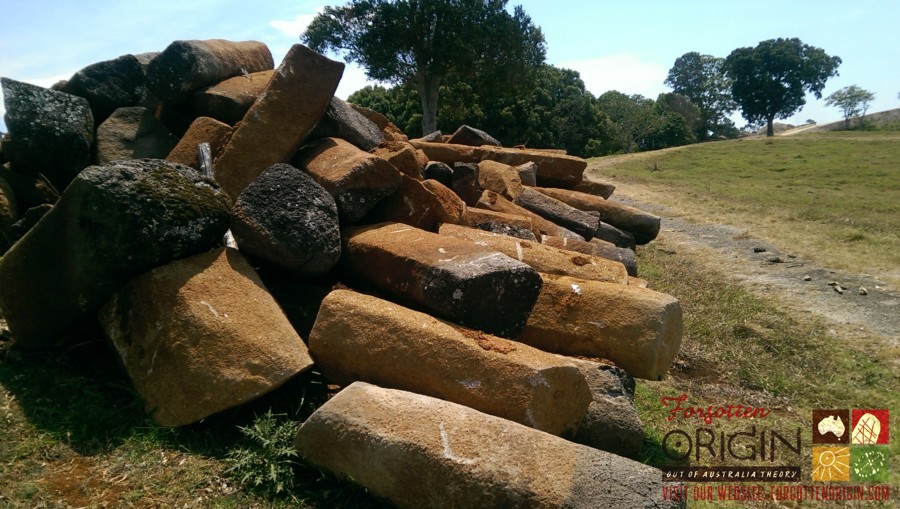 From the Council of close to forty, the women will choose seven people who will form an inner group exclusively concerned with the immediate future and welfare of the rocks and will make final decisions until those rocks are moved to their rightful resting place. When that happens, and it will, the tasks of the seven chosen are complete and the larger Council will take over in deciding how, who and future directions. The first step is simply a matter of authentication and recuperation of these neglected and damaged stone sentinels, everything else is further down the line.

The following tasks have been ticked off; the solicitors of the developer were informed of our concerns; I spoke with the owner/developer voicing these issues; contacted both National Parks and Wildlife Services and Heritage and Environment; personally spoke to two Aboriginal representatives of the Office for Heritage and Environment, liaised with the local member of the State Parliament and alerted the local media to the unearthing of these rocks.

We went through every available channel and so far, outside the Nimbin Good Times, there has been no result or interest shown. That there has been little interest is neither disappointing nor unexpected, but merely more of the same. It matters little as the Council will take control and needs no guidance or encouragement in such matters.

Our task is simple, to put all the pieces back together. The site was so incredibly sacred for so long, then everything stopped. That time in suspension is now over. Not long ago Karno called for eight hawks to circle above the mound in figure eight, and they did so at his bidding. The spirits were stirring at that sacred portal and are ready to take the next step, all we have to do is prepare the way and do their bidding.