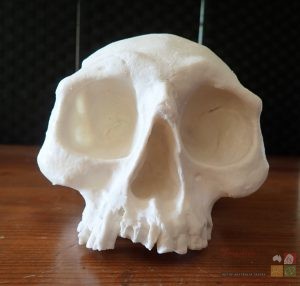 Over the last eighteen months we have personally seen two ancient Australian Original skulls that look nothing like any sapien or hominid that has walked on this planet, and have been sent two sets of photographs of what are essentially, no-forehead skulls.

Two of Australia’s top experts in this field have spent months jointly recreating a complete skull. They based their reconstruction on eight actual bone segments of one skull, about fifty photographs of a similar skull found at a burial site with the face and skull intact, and photographs of the skulls of two more no-forehead skull.

When comparing a replica of a 1904 Original Homo sapien to the reconstructed no-forehead skull, of the many differences, four stand out.

All four no-forehead skulls were found in south-eastern Australia, at this stage that general geography is sufficient. Work is in progress with the relevant government authorities and Original representatives of each of the four tribal estates where these skulls were buried. Arrangements for scientific testing are arranged, but can only occur with the Elders and Original spokespeople’s blessing.

What is already evident is that this skull is much bigger than that of all Homo sapiens sapiens (<20-30%), yet all the books say we are as smart as it gets. This changes everything.

With the replica skull arriving today, the next task is to share this seminal truth and ancestry with the public. It is fitting that the first presentation of this amazing change in circumstances takes place in Melbourne (Eastleigh Community Church, 216 East Boundary Road, Bentleigh East) from 4-8 pm April 25, with food provided at intermission. These skulls, plus many other apparent anomalies from the Original past, present an entirely different view of the past, and our immediate future. 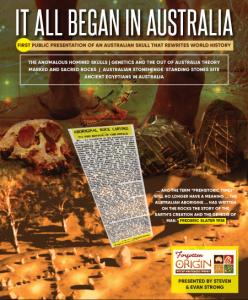