This report on new artefacts recovered is as much a description of features present, as it is a long-overdue thank you to Ros Mulder. It was Ros alone who set us on this rocky path. From the first time when she met us and Michael Tellinger on country at Kariong with Ros’ Rock 1 in hand, then throughout her either exhausting her superannuation bidding for rocks on the open market or just being called by rocks when in the country, she has been the essential part of this journey into the Original unknown. But it is not just these rocks that consistently exhibit traits and features beyond the capacities of all stick, stone, bone and open fireplace toolkits. With one exception, Ros has purchased all the rings and metal objects from Lemuria and Atlantis. Then to top off these massive contributions, time after time her extensive research and intuition found facts, figures and features then unknown but now incredibly relevant.

What struck us most about her last four offerings is not just wide scope of these four artefacts, but equally it highlighted her three trademark styles of acquisition and contact.

In the Bottom of the Discard Bin

It all started off so apparently mundane and somewhat insignificantly, then transformed into an event that is either coincidental or rock magic. Ros was with a friend inside a crystal, rocks and New Age paraphernalia shop, but had no interest in the showcased items and was drawn to a $5 bin of discards and lesser lights. Her friend asked her why her attention was captured by the merchandise so cheaply priced, all she could say was that there was something in this collection of castaways that was calling her. 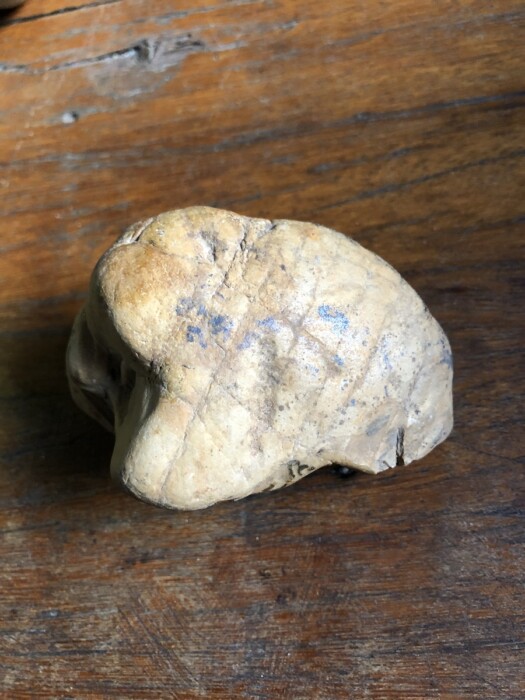 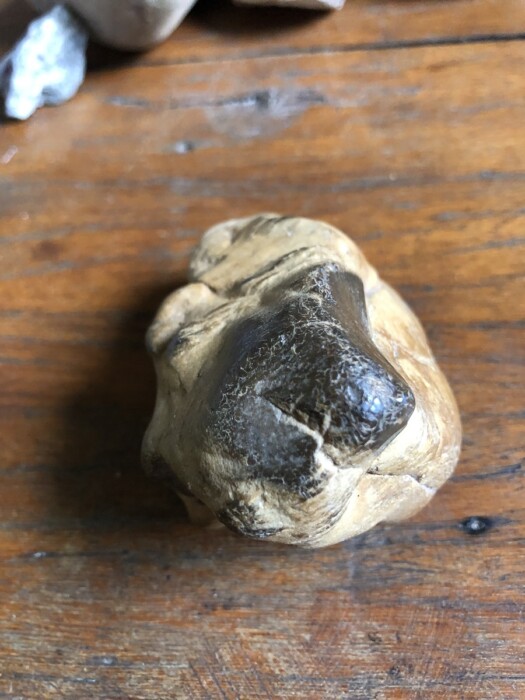 Of the hundreds of rocks and crystals in the bin there was one rock calling, and soon after, located. Ros just knew something was there, but as to what, well that exceeded expectations. From her very first sighting (and mine) she was compelled to draw a comparison to the rock dug up on her property, Ros’ Rock 1. Apart from being a somewhat frayed and worn version everything else was essentially a repeat performance. This rock Ros picked up has the same size, is semi-rectangular in shape, has a residual dark upper veneer with one section still intact, very sharp thin lines have been cut into the topcoat and the lighter coloured base rock, and has plenty of intersection points and angles that are trademarks of the First Language.

She Heard it on the Grapevine

This is not an isolated incident, there are many other rocks that called her, perhaps summoned would be a more fitting description. Irrespective of what explanation suits, it just happens, a lot in her case, but this is but one of three available avenues of initial contact. About half of the rocks we are care-taking came through people independently contacting us, that percentage is far less in Ros’ case but there are some. Her most recent contact was with people who had a very unusual rock she knew was very reminiscent of a much earlier rock she had bought from a ‘collector’ of original artefacts.

As it was with the rock Ros was called to in the bin that looked similar to Ros’ Rock 1, this rock immediately reminded both Ros and me of a rock called Ros’ Rock 5. The person who found this more recent rock is a miner who was working in the Pilbara region (W.A.) and after blasting he came upon this rock. Being a long-time miner, he immediately knew this rock was neither natural nor the product of any stick, stone, bone and open fire toolkit.

The reasons this person who works with rocks and soil for a living selected and kept one out of millions of rocks was simply because the straight lines of varying widths cut into this rock and large remaining sections of an attached much darker thin coat on top of a lighter-coloured base rock are not due to any natural process, and nor are the flat sides and general shape a normal geological arrangement. The recurring problem with this rock was that there was no book, expert or reference point to consult, it just didn’t fit into any accepted narrative. So, they kept the rock and had nothing more to add until stumbling on to our research, and then soon after contacted Ros.

Ros’ third avenue of acquisition is immensely more expensive, but alas it is also where most of her most impressive finds were auctioned.

The next two rings were not found in any bin but were purchased online by Ros. As with many of the Lemurian rings they were found near Angkor Wat, and from first sighting Ros was taken by the similarity of colour of metal to the other rings from Lemuria and Atlantis. But until a chemical analysis was conducted, it was at best an educated guess scaling back to a superficial likeness made from different elements.

One of the rings Ros purchased was from the same outlet from where two other Lemurian rings were bought. It too was ‘recovered’ via a metal detector during the Vietnam war. As we have previously established through analysis, all Atlantean rings have strict content and percentage regime of five elements that make up the so-called mythical Orichalcum metal which is claimed to be sourced exclusively from Atlantis (copper, zinc, iron, nickel and lead). This ring, being from Lemuria, should also be made from the same alloy, but then supplemented with the compulsory addition of tin.The second ring has one extra addition in the form of chromium simply because such a high zinc content necessitates the addition of a metal hardener like chromium. 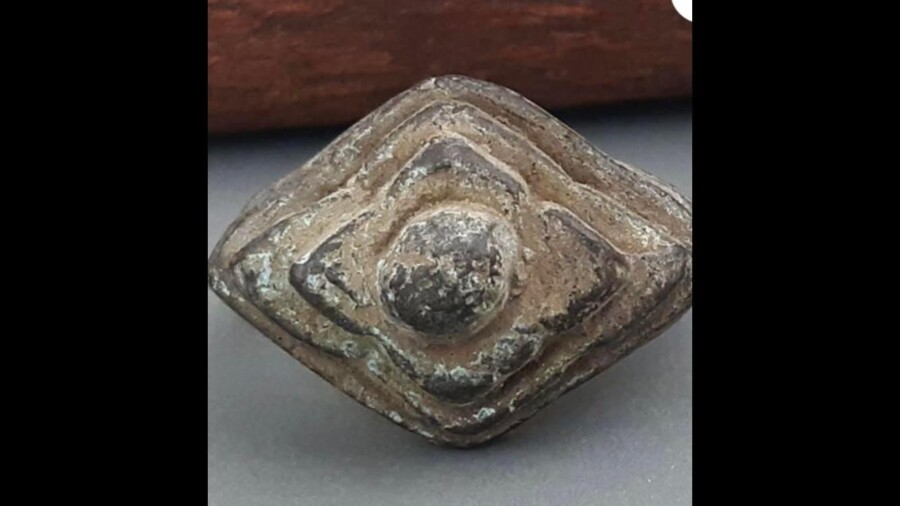 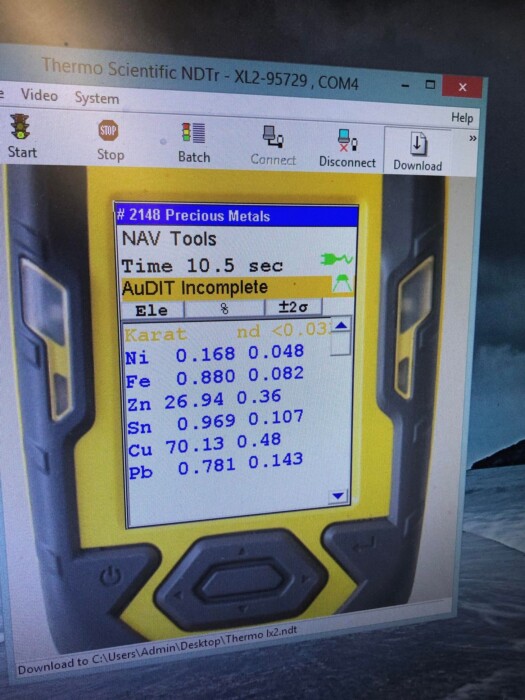 That both chemical read outs confirmed that each ring was made from Orichalcum plus tin, was fully expected, simply because Ros has of yet never failed once she sets out looking for the genuine article. 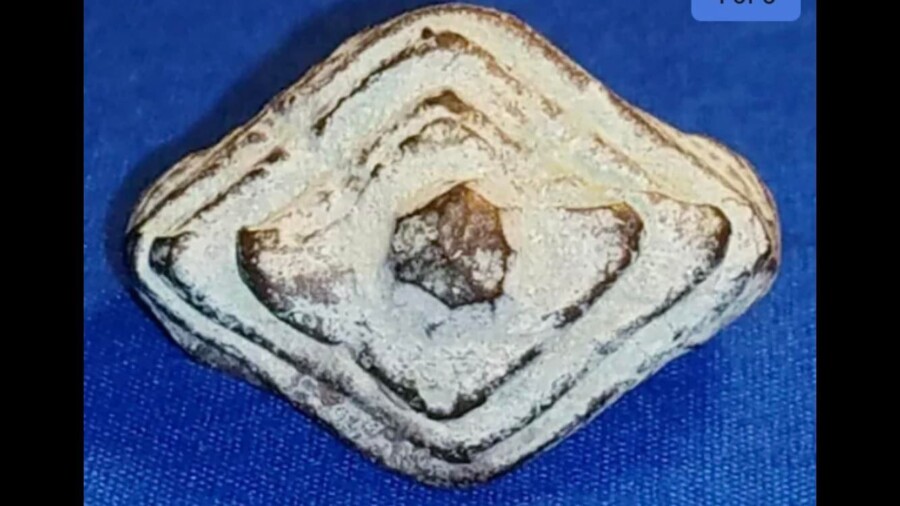 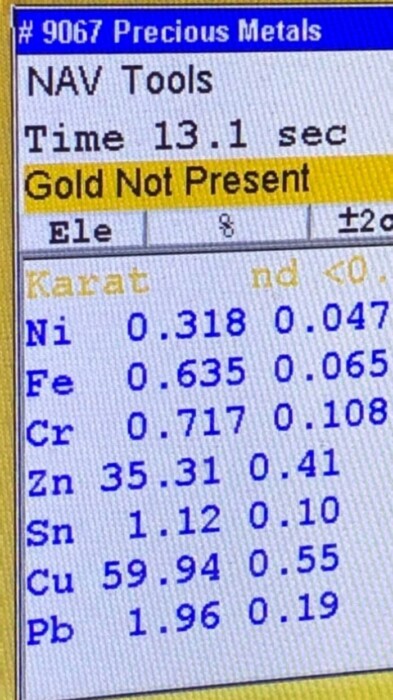 These two rings and two rocks of themselves add up to a completely different, verging on opposite take, on human evolution and history. Both rocks are marked in straight lines, angles and intersection points, which is off-world star rock business. Each rock is coated with a chert (silica) and resin coat, a temperature of thousands of degrees is a prerequisite before chert will melt then can be attached to the lighter coloured base rock, which means that this process is at the least the end-result of highly advanced on-world technology. The cuts on both rocks go through the thin veneer and into the base rock, it was not chiselled, but cut with the line steady in path and consistent in depth and width. Such tools are regarded as sophisticated anywhere on the planet today.

Technology of this level is supposedly not present in our distant past, unless the mythology of Atlantis and Lemuria is not fictional but factual, none of the hundreds of marked rocks we are protecting, including these two most recent additions, make any sense whatsoever. Of course, that leads us towards the two rings Ros purchased, which reconfirm that such mythical on-world locations do actually exist.

But this check list does not end there, both the rings from Lemuria and Atlantis along with many rocks have a powerful mystical symbiotic capacity when held or placed on a finger. We have written extensively on this subject and will be returning to the most recent increase in their magical energy in an upcoming article describing and itemising rock interactions with dozens of people during workshops held at our property. The evidence is both compelling and nigh on impossible to dismiss.

Add all of these facts and figures together into one equation and the answer is, infinity.