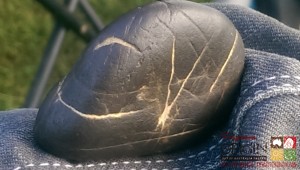 With both the formal and less structured introductions complete, now is the time to assess the credentials of Gemma’s Rock 11. From very first sighting there was no doubt that this marked rock is yet another part of this ancient Original assemblage. The dark chocolate veneer of chert was but one familiar port-of-call, just beneath the surface was the ever-present light cream undercoat.

As has been the case with every marked rock the lines were not chiselled but cut and of the many imprints present, none have broken the top layer of chert.
And it is two of these cut lines which is the dominant feature that precedes any analysis or comparison. She sensed that they intersected in creating an angle that Gemma knew is the central part of the Ros’ Rock entourage. It looks so much like a problem taken out of a maths text book asking the student to use a protractor and measure the angle. Gemma accepted the challenge and found her intuition was spot on, to the degree. It was, as she first hoped, thirty three degrees. Being the most prominent marking it was too much of coincidence to be anything else than intentional and due to a human hand and tool of considerable sophistication. Gemma knew, as we do, that the angle thirty three degrees appears seven times on Side 3 of Ros’ Rock 1 and forms the principle component of some sort of map.

The geometry lesson does conclude with one angle. There are two sets of parallel lines cut into this rock that run across and below in what seems an intentional way of highlighting and adding more mathematics to the principle measurement of thirty three degrees. All six lines on one side obey strict geometric principles and thus rules out any chance, be it ever so remote, that this is all down to natural agents. Since recently receiving confirmation from the highest level through an Original representative of the Old Ways that these ancient chert rocks are both spread across the country and incredibly powerful objects in every conceivable sense, there is no doubt that this rock is part of this very sacred category. The six lines on Side 1 are sufficient in themselves to establish that this is the genuine article.

Yes from the first second we knew this marked rock belonged to the Ros’ Rocks collection and that was a relief at so many levels, but let’s be brutally honest, we have twenty marked rocks yet to be discussed that ring ‘more bells’ on first sighting. But the problem is that these rocks carry a form of communication that is so cryptic, intricate and multi-everything, and there are plenty of things we have still missed. What seems to be a repeated personal lapse in application or just part of the deal, it has taken many inspections before beginning to appreciate the depth of delivery and mathematical precision this rock has on display. It needs to be clearly understood that nowhere in ancient Original art, or any cave, rock or engraved testimonial will there be six straight lines in one cluster of such geometry and exactitude.

Is there a clearer way of demanding that we all pay attention to this obsession with thirty three degrees that any human from ancient times could devise? We think not. 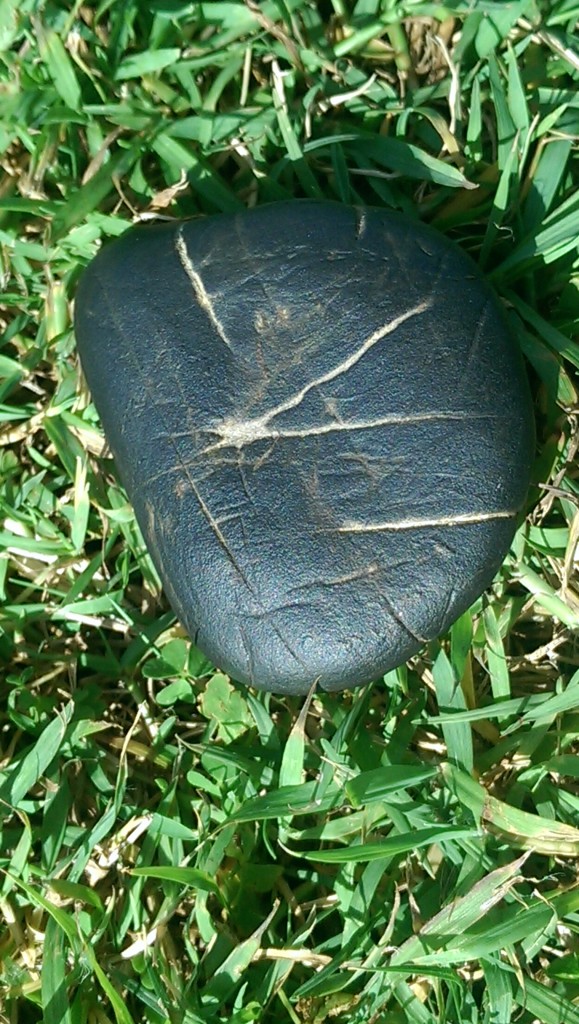 Past that point it all becomes a matter of bonus extras, the case is made and Gemma’s Rock 11 honorary inclusion into the elite Ros’ Rocks ensemble is registered. Nonetheless, it would be remiss in not including a brief summary of other points of interest that we will develop upon at a later time.

The four rows of fine pecks are very deliberate in arrangement and delicate in execution. Unlike Ros’ Rock 4, which has many similarities and is part of the same sub-group as 3, 6, 7 and this rock, the pecks on the smaller bottom edge are about the same in number as Gemma’s Rock 11, but far wider and deeper. Again such a tight clean formation of pecks is another extension within a form of communication that has no equal on this planet. The timing means nothing, it may be very old, but it is very, very elaborate and very, very much so far beyond the reach of any hominid intellect of today.

As a first inspection there seems to be three widths of line and they are predominantly straight. We counted no less than 22 lines and angles and suspect further measurements by Dr. Derek Cunningham will find quite a few of the same angles can be found on other rocks. The lines are without doubt the dominant feature, this is a rock dedicated to length and inclination.

As mentioned earlier that we feel Gemma’s Rock 11 shares many features with Ros’ Rocks 3, 4, 6 and 7. None have depressions or grooves created to accommodate fingers or the thumb, and all seemed to be made to sit in the palm. The size and arrangement of lines, colour of chert, quantity of imprinting and shape of the rocks are similar and suggests that these rocks stand united in delivering details and information centred around one theme.

This is a small rock measuring 4 cms x 3 3.5 cms, even the enigmatic geometry and specific angle is at best an extension on what can be found on other rocks. The imprints and lines are not new or different, nor is the thin veneer of chert that was once molten, in fact, nothing on display opens new horizons and is merely more of the same, with one unique exception.

Two Opinions Separated by Prior Knowledge 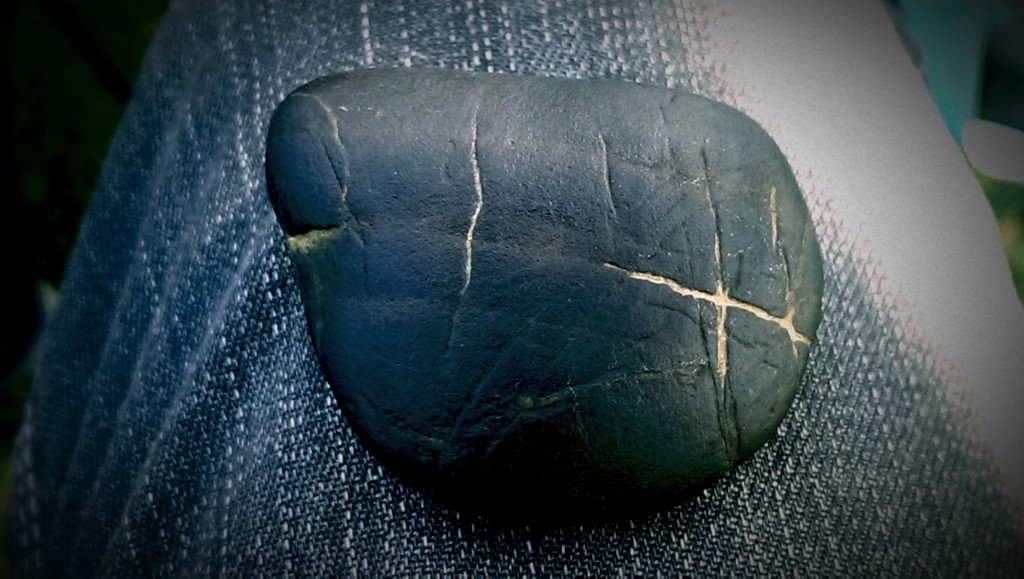 Putting together all that separates and binds, what Gemma found is both artificial in construction and sacred in purpose. However, having said that, we do know that the geologist she approached differs in his take of the causal agents. He sees this as a natural occurrence, but this lapse is forgivable as he had no base upon which to compare. Knowing nothing of the Ros’ Rock collection and conditioned to view the past with very tight blinkers, this geological aberration can be seen as a one-off deviation from the norm and therefore it becomes feasible that the sundry markings on this stand-alone rock could be due to the actions of nature and weathering.

I made contact with our highly qualified and extremely anonymous geological advisor for his opinion and he passed no critical comment beyond observing it was yet another part of the ensemble. Fully versed in the intricacies and credentials of each rock presented thus far, and very keen to champion natural causes until all avenues are exhausted, he is an extremely strong advocate for the recognition of many of the Ros’ Rocks series, and had no hesitation in including this rock amongst such esteemed company.

The real truth is that this rock is just one of many but was found in a different location, more recently, through sheer chance or providence, and was actually stationed off-shore, yet is very much a part of mainland Australia’s ancient history. Like all of these rocks they have an ancient story to tell, and the narrative of this rock begins with an introduction, what comes next is still unknown and most definitely a work in progress.