Yanka was a 16 year old Polish school girl when the war broke out and the Nazis came in. She wrote her story of survival, up until the time she was caught by the Gestapo. She typed it herself. When she got to the part where they caught her, she couldn’t type it alone; so her daughter Nina suggested the family interview her, and together they taped her experiences in Auschwitz-Birkenow concentration camps.

Nina is one of the originals. A passionate Australian; a travelling community artist, who harks back to the 1960s and 70s National Art School scene in East Sydney; and who has continued to serve her Central Coast community, and many other communities worldwide, with her own version of a dance with fabric and paints, drawing story and connection from all she encounters.

“Don’t Cry, Dance” is her family’s memoir celebrating and honouring life, love, family and tolerance of people from all cultures, colours and creeds. 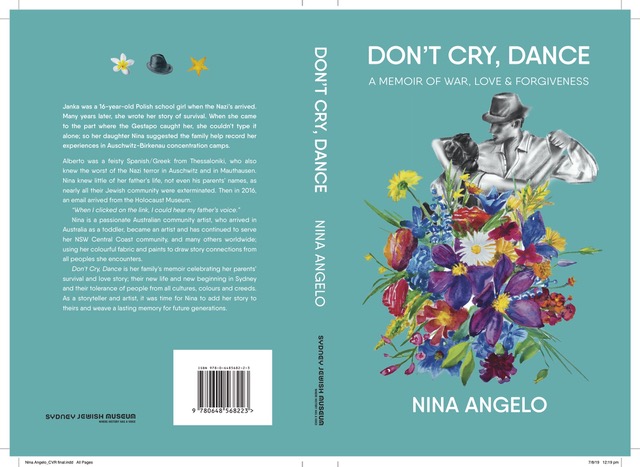 “Unfortunately, in my second house-fire in 1993, I lost Janka’s tapes … I lost her voice and the rest of her story. She passed in 1985 and it was like she died again. I thought my mum’s ‘written’ story was also lost in the fire but miraculously, I found a folded copy she had given me years before she died, stored away in a chest after the first fire in 1988. It somehow survived. That was a big day.”

She didn’t know much at all about his life and her paternal family, not even her grandparent’s names – 99.4% of the Jewish population there were exterminated.

Then by fate, in 2016, an email arrived from a friend in Sydney with a link to the Holocaust Museum in Washington in USA.

“When I clicked on the link, I could hear my father’s voice.”

In 1986, Alberto had been interviewed by a historian from the Sydney Jewish Museum, Sophie Caplan. He left seven hours of recorded interviews about his life. The family had no idea. It was recorded in French, 30 years earlier. Nina transcribed, translated and transformed to print, his extraordinary story as a Jewish survivor of Auschwitz and Mauthausen, who witnessed and experienced the worst of the Nazi terror, and yet found the love of his life at the close of World War Two.

Nina’s birth in Athens, Greece in 1947 brought new life, after all the losses Janka and Alberto had experienced in the concentration camps. Australia invited them in as new migrants. They discovered a new life and  a new beginning here.

As a storyteller and artist, it was time for Nina to add her story to theirs, and weave a lasting memory for future generations.