The discovery of a grounded and polished stone-axe, dated to be no less than 65,000 years old certainly upset mainstream narratives and numbers. A report on the archaeology published in the Sydney Morning Herald (July 20, 2017 pages 1 and 2) compiled by Tony Wright focused on the unexpected repercussions of this research, conceding that “Aboriginal people have lived in Australia for a minimum of 65,000 years … 18,000 years longer than had been proved previously and at least 5,000 years longer than had been speculated by the most optimistic researchers.”(1)

The central point that has still not been understood relates to the discovery of “the world’s oldest stone axes with polished and sharpened edges,”(2) and in particular, the contextual implications of the fact that “no other culture had such axes for another 20,000 years.”(3) Not only is this advanced technology exclusive to Australia, “one of the most striking finds was the huge quantity of ground ochre, right from the oldest layers”(4) which as the researchers correctly observed meant that these people “were already enthusiastic artists, and had continued to be so in an area known for its spectacular rock art.”(5) If they are correct, this is now the earliest found use of ochre used for art, which means not only are these people the first to invent the axe they were also the first artists.

This middle level date also puts to rest the incorrect allegation that the arrival of humans in Australia led to an immediate drop in the numbers of all mega-fauna species through opportunistic hunting of the largest sources of meat. Now agreed to be together for no less than tens of thousands of years, before the numbers began to decline as the climate changed, this assumption now has a much weaker and illogical base and was always incorrect.

Despite the shortcomings and endemic narrow focus there is one aspect of this research that is one small step in the right direction, as it is now agreed that the “archaeologists will have to recalibrate previous assumptions about the journey out of Africa.”(6) Granted they are still attached to the mistaken idea modern humans originated in Africa, but as the arrival date was 40,000 years, then 50,000 years, recently overtaken by 60,000 years and now we have no less than another 5,000 years to add on top of this ever-expanding algorism, it is becomes increasingly difficult to believe these numbers will not change again.

The truth is the science conducted is unquestionable, the paper has “been peer reviewed by internationally recognised scientists”(7) which led to their report being “published this week in the world’s most prestigious science journal, Nature.”(8) However, as meticulous the methodology was the conclusion is blinkered and verges on horrendous in its limitations. It is as if the whole history of Australia revolves around this one site, everything else is lost in the rush to don blinkers and look nowhere else for context or comparison.

For starters 65,000 years is not a remarkable date for archaeology in Australia, that number has been equalled or bettered on many inconvenient occasions. Often uncomfortable archaeology does reach public media outlets and has its fifteen minutes of fame but, it is never accompanied by an academic or official offering any comment either in support or denial. It comes and then goes, as no authority or institution takes ownership or shows interest, sites and artefacts like these soon fade off into the ether.

So, with a lack of big picture thinking identified, we intend to fill that void and will begin proceedings at Point Ritchie. Highly respected archaeologist, Jim Bowler, was rigorous in the science applied when investigating remains found in middens, but fully unprepared for a minimum date of 80,000 years. He readily conceded that date was conservative and another 10,000 years could be added, but was unwilling to endorse what that meant. A staunch advocate of the entry in Australia via Africa 50,000 years ago with a gradual spread around the coast from the north, he knew no less than another 10,000 years had to be added when examining sites in Victoria pushing the supposed entry date into six figures. Due to that expectation he refused go any further past remarking that until more dates of a pre-60,000 years complexion come on the scene, he certainly wasn’t.

Bowler now has what he requested before commitment undeniable confirmation of much more ancient dates for human occupation in Australia. He should now return to the site of much older occupation than that found in Arnhem Land and be open to anything that confounds or disappoints his support for an external migration into Australia.

In that same spirit of extending time spans and horizons, once finished investigating all the middens Bowler might consider popping across to the South Australian Museum to inspect an Original rock slab stolen from Panaramitee. An utterly magnificent piece of stone art, this two metre slab of rock contains the engraved head of a salt-water crocodile measuring almost six foot. Found hundreds of kilometres inland, salt water crocodiles of this size are not part of this arid landscape, and have not been present or accounted for a very long time. Highly respected archaeologist, Josephine Flood, was also intrigued by this intricate and extremely ancient engraving and far less timid when addressing the obvious accompanying contradiction. She noted that this site “has always been an enigma, but in view of the thick layer of desert varnish on the petroglyph, I am going to be so bold as to suggest that it may derive from a time when terrestrial crocodiles actually co-existed in South Australia, although the youngest crocodiles found so far date to more than 75,000 years at Cuddie Springs.”(9) 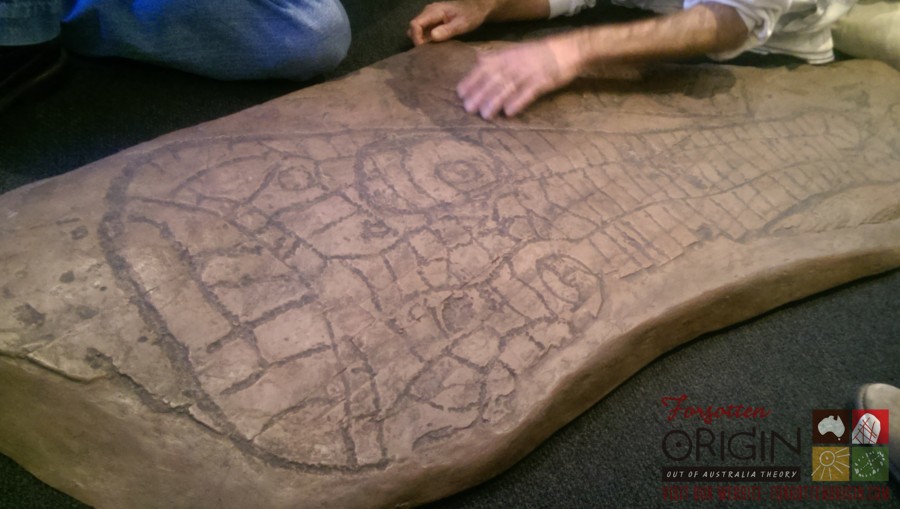 Let’s do the maths on a minimum date of 75,000 years situated a long way inland in part of the least hospitable parts on the country and well south by many thousands of kilometres from any hypothetical entry place. There is consensus amongst orthodox historians that once the Africans entered, they were few in number and the spread from first landing was understandably cautious and gradual. To begin with, the immediate northern area was settled, then humans slowly spread along the coast and occasionally ventured a little way up major rivers. It took close to 20,000 years to settle all of the entire coast before inland expeditions needed to go further from the coast seeking unoccupied land. Places like Panaramitee are supposed to be first seen by human eyes around 25,000 years after the first landing, which pushes back an entry date to no less than 100,000 years.

While still inland, could we suggest that Jim Bowler turns his focus from Panaramitee some one thousand kilometres to the east to another site well away from the coast, and also outside the reach of the first twenty thousand years of human habitation. Even better is the fact that the chief scientist who investigated this site is a colleague of Bowler and the agreed Australian expert on the operation and analysis of core extraction. Gurdup Singh was in charge of operations when extracting a deep core out of Lake George (NSW). The returning sample shed light on what had occurred at this location over the past 4,000,000 years. Of particular note was the sudden appearance of huge deposits of charcoal that began at 128,000 years and continued to present days. Such was rate and consistency of charcoal readings, which has no parallel over the earlier 3,872,000 years, and was most pronounced during periods when the water level of the lake was high, he correctly deduced that the appearance of fire during wetter periods was strongly indicative of fire-stick farming by humans beginning around 128,000 years ago.

Let’s do the maths again, 128,000 plus 20,000 years equals an entry date of no less than 150,000 years, and if that number isn’t enough to convince Bowler to return to Point Ritchie, can we suggest he checks his diary to see what he did thirty odd years ago when working on the Great Barrier Reef with the same esteemed Gurdup Singh who was plying his trade at Lake George. No criticism here, as we get older remembering gets harder. I never go to the shop without forgetting something, even if I haven’t lost the list on the way, I still overlook something written right in front of my eyes. It seems Bowler is no less mortal and forgot something on his shopping list. He along with Singh and another academic released a date of human occupation after analysing core extractions taken directly out of the Great Barrier Reef. The best science they could muster gave a date for charcoal residue from fire-stick farming by humans beginning at 186,000 years. Throw in ten thousand years to get around the top of Australia and start down the east coast, and this now means the minimum entry date is now over 200,000 years.

This is all called big picture thinking, which begins by establishing a context and background setting. All of these sites mentioned are well known, but not particularly well received by most academics and Bowler has certainly been one of the most vocal defenders of the traditional steady as she goes approach. Regardless, each paper is the result of solid field work by established academics using the latest advances in the laboratory. None of these numbers are ours and nor is their list complete. There is also ‘unfriendly’ archaeology at Rottnest Island dated at 70,000 years, while controversial dates of 112,000 years for art and 175,000 for tools at Jinmium only confirm the antiquity suggested at the Great Barrier Reef, and to top this off there is talk of six figures coming out of Lake Eyre, Devonport and Lake Mungo.

So right now there is a lot of fuss over an axe that has, as the headline on page 1 suggest, created “a wrinkle in time.”(10) All that will come out of this is a reluctant nudge of 5,000 years that will lead to a bit of minor tweeking to a “journey out of Africa”(11) which never existed. If by chance the Africans did get here and were literally genetically sealed off until Cook, why is it that the genes of the Original people are utterly unlike the Africans? Given that the Original people have the highest percentage of Denisovan genes in the world, mine is 4.7%, why is it all African races have zero Denisovan readings? More to the genetic point, why is it that months ago a new unidentified strand of gene that only resides within Original people was discovered, and again is totally absent in all African genes?

The genes do not add up, the dates cannot stay still, the academics keep changing the goal posts and all along there still are Keepers of the Old Ways who know the First Original truths, waiting quietly to be asked properly when the time is right. Obviously on July 20, 2017 the timing was atrocious.

(9) Josephine Flood, 2004, “Archaeology of the Dreatime: The story of prehistoric Australia and its people“, (J.B. Publishing, Marleston, South Australia), 180.