A Rock out of Time

This article is written from within the Bambara State forest otherwise known as the Brisbane Waters National Park. Our team works within this traditional country looking for sites that some have sat there undisturbed, for in some cases, a very long time. Our team is a research team that works with the traditional owners of this land under the guidance of Gavi Duncan, Graham King, Nina Angelo, Steve and Evan Strong. And this is just one of the interesting rocks our team has managed to come across. 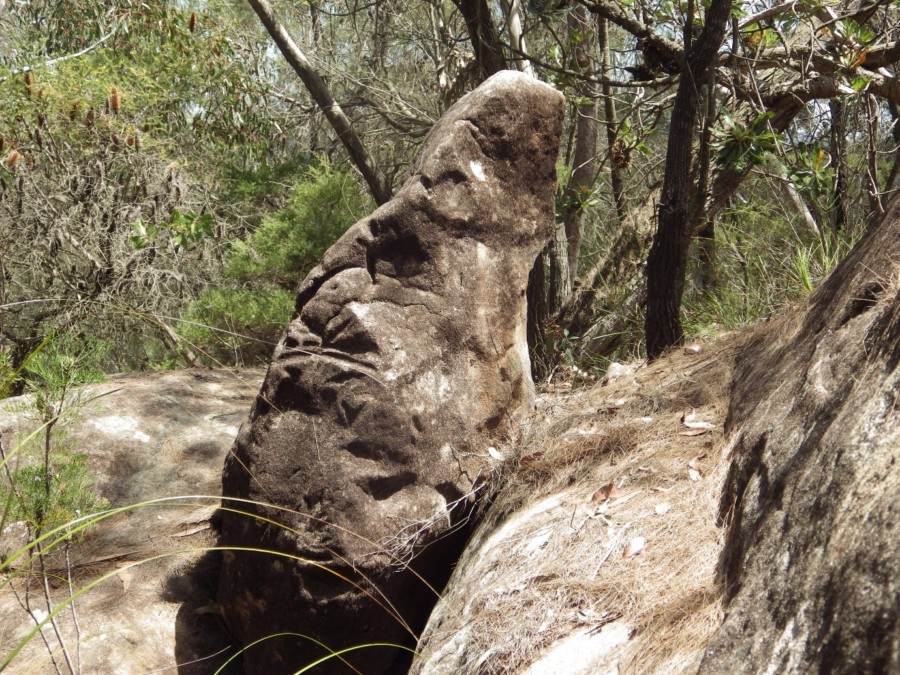 This sandstone rock has, as you can see, had some amazing work done on it. It is approx.. 1.5mtrs tall and approx. 1 meter across. It has what are called ‘shells’* on both sides – these are said to ‘ramp up’ the energies of the stone – [allows one to connect with the particular energies in situ for the apparent benefit of aligning conscious intent for input into the memory field] One shell has pigment in the bottom still embedded the sandstone, a beautiful green.

There are assorted marking and sculptured areas on the outer exposed surface of this rock.

The first thing we noticed is what looks to be a Goanna/snake/dinosaur head. 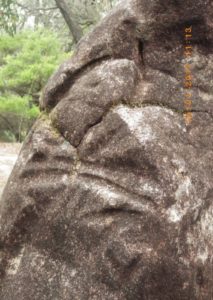 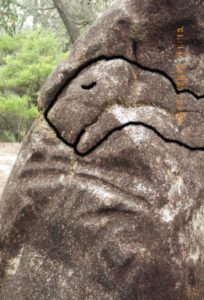 You can clearly see the shape of the head, along with the eye and mouth. It has a crack starting just above its mouth and runs back through the head and down the neck area. You can see the area around the chin raises slightly.

The top of the head has a small indentation before following the same line of the head. 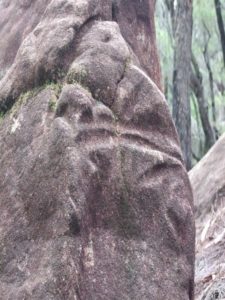 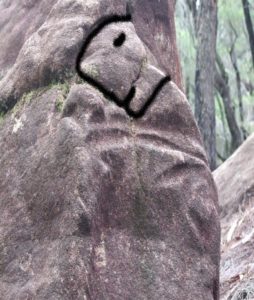 As you can see from this side on picture the Face laps around the side of the rock. From this side the eye and mouth are far more visible. You can also see the changes along the muzzle or nose, and the varying shape around the eye.

Right below the head are a pair of grooves going across the face of the rock, you can see the smaller grooves around this area, we will get into more detail later with the shapes around the grooves. There is the same groove pattern on the bottom part and a small amount on one side as in the following pictures. 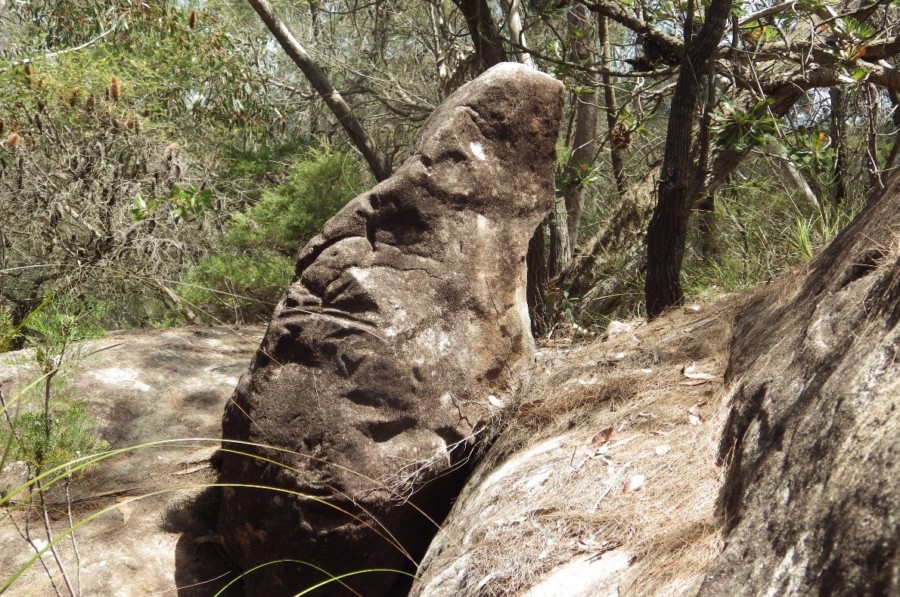 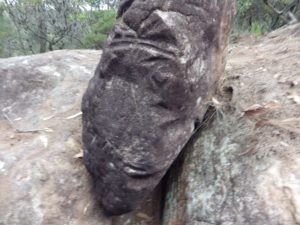 As you can clearly see the bottom has similar grooves on the lower portion of the rock as well as marks and lines going out from the grooves.

With the last set of markings we are unsure of who made them at this stage, though we continue to investigate threads, as well as look for correlating patterns with any new discoveries on all additional sites we discover. 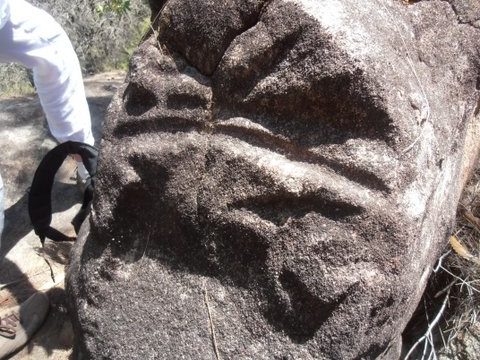 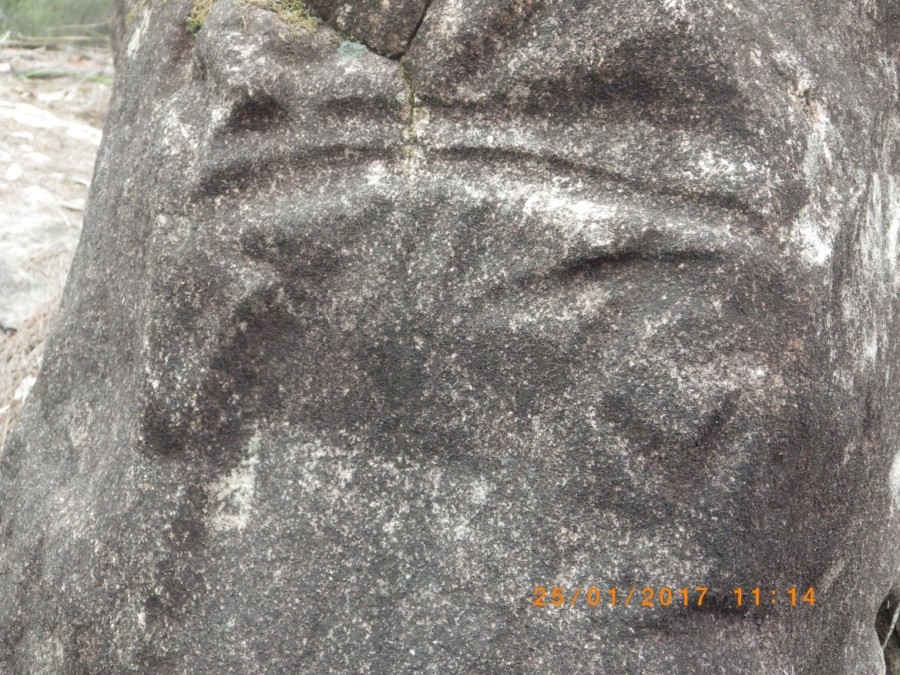 The one thing we can say about this rock, is that at this stage these markings cannot be positively identified as Original People’s work and possibly from an older epoch. At any rate it appears someone has left us with a rock out of time.

The last 3 pictures are of the rock in question including shells which still hold pigment in the bottom on one side. Now this is the side with the least amount of work but has a beautiful feature none the less.

Looking over these last pictures you can see markings and spots than can identify this as all one rock. This is from one of 5 sites our team is currently looking at. And this doesn’t include the Kariong glyph site among that 5, And with the guidance of the original custodians of this country, we all work towards the protection and preservation of such wonderful culture and history, even if some things look all out of place from that which we are taught.

*  Shell is a colloquial terminology applied to the geological artefact of a hollow shell-shaped amphitheatre type formation that occurs in sandstone. These formations occur in many locations, though strikingly occur more often in conjunction with lines of energy or vortices. As we have been informed they are often used as meditation or singing places and in this regard seem to parallel the use of, or one of the uses of, dolmens in the northern hemisphere. (pers com Trevor Wie)