Of course, of the three artefacts Kate’s parents were given by the Elders from Mount Hagen, the carved head of the Alien/hominid stands apart. Undeniably the three artefacts are bound together by the Original guardians and geography, but we are of the belief that the head carving takes precedence through purpose and geology. The bird and cog/machine are of the same rock, while the head is carved from a basalt-like substance. It is also evident that in the content, geology and chisel strokes on the head there are marked differences.

Some Opinions from the Grandstand

Despite what separates these artefacts there seems to be one binding principle, flight. The bird obviously, with wings outstretched and individual unfurled feathers marked out with chisel, is all about moving through the air. Perhaps, within the configurations, angles and proportions there are clues of aero-dynamic principles and alignments? So too, if this is indeed an Alien, be it a Grey, Cone-head or some other off-world species, their mode of transport involves flying not only through air, but space, and possibly even time. In completing this exotic stock-take we have a circular six-cogged object with a perfect central circle that narrows to half its diameter in the middle. We are not engineers, but it looks like it is meant to rotate around some sort of axle presumably to facilitate a form of motion or movement. Or perhaps it is a model for a space-ship? Either way there is a good chance this object facilitates some form of movement. In our estimation at the basic level, these artefacts deal with the same general topic of flight through the skies and heavens above, but focus upon different aspects of the same theme.

Equally, well not really, but we are trying to at least appear balanced, an alternative explanation may be that this unusual strand of now extinct hominid worshipped flight and revered the bird. Another option with better credentials is that this is a symbolic representation of a spirit or God they worshipped, or a nebulous entity from another dimension. At first glance that notion could apply, but we still have the problem of explaining away so much advanced technology associated in making this carving of a head and neck. Spirits and poltergeists bring many things across from the other side, but as yet no-one has made claim to metal chisels, drills and bits being part of their esoteric tool-kit. 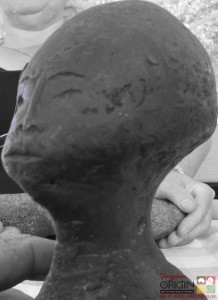 For us, it is what is missing on the skull and neck that is the starting point of any analysis. There is no subtlety in a gaping circular hole drilled into the neck, nor is it an oversight that one ear was never carved, this is intentional and deserves much further deliberation. Could it be that one half of the skull is of an Alien and the other side, which also bears the extracted core from the neck, is the hominid that was crossed with extra-terrestrial genes? To drill that deep into the neck can lead to only one result, they will strike spine. We sense it isn’t oil but genes they were drilling for, and we also suspect at a later stage they were no longer extracting but injecting.

Continuing in the same vein, and remembering that this is purely speculative and without Original consultation, direct genetic intervention via the neck may provide an explanation to the inherent inconsistencies whenever the vexed topic of junk DNA is raised. The mere mention of any organism of which 90% of the DNA coding is deemed to be of no consequence and thus relegated to the junk heap is illogical and death-defying. If our heart, kidney or any vital organ was functioning at 10% capacity, we would be dead or on the operating table. That being the physical truth, why is it we are so willing to accept that both the brain and genes function as if only one cylinder is running in an eight cylinder car, and then still expect to get up the next hill running smoothly?

Remaining on that same neck, although long and narrow it has great depth. Everything about the neck, irrespective of the gaping hole, is anatomically wrong if comparing to any Earthly hominid.

The same observations also apply to the facial features on this carving which do not belong to the Indigenous people of PNG or anywhere nearby. Not just PNG, Australia and all the Pacific Islands, until Cook all people had broad noses, wide eyes and faces. There was no race in residence with such fine delicate facial features, almond eyes and what seems to be lacking in any facial hair.

Irrespective of whether our observations are flawed or valid, there still remains one incontestable truth. Knowing that these relics are very ancient, coming from a time “long before true,” the technology required in creation is in open contradiction to many fundamental tenets that underpin our understanding of humanities’ past and genetic ascension.

Outside that certainty, every other avenue open to investigation is embedded with degrees of possibility, and that proviso definitely applies when trying to decide who is posing for this sculpture. To suggest it is a ‘normal’ person who was modelling is no better than the fourth best choice on offer. It is most likely to be an Alien in the material sense, then next in line is an entity from the spiritual non-material plane, and lurking in shadows way off in the distance is the remote possibility it is a representation of an individual from a rogue group of hominids.

We really don’t care who the inspiration was, if for no other reason than there can be no final verdict and any identity will always be open to conjecture. But when it comes to the hardness of rock, sophistication of technology that was necessitated and what was extracted and omitted, these features are real and present and cannot be dismissed. These truths lead to the real issues that should be under consideration, it has never been a matter of who was the model as this is of little consequence, but the chisel/tool/laser/sonar or device that was used, along with the being who created this sculpture, this is what is of crucial importance.

In seeking any solution to these apparent anomalies, whether consulting approved books, lecturers, syllabus or expert they will be found wanting. There is nothing in their sanctioned narratives that can accommodate subject matter or technology of this elevated level. We have said this so often we literally cringe because nothing ever changes, ask the Elders and Custodians of the Old Ways. Go to them in reverence and respect, and don’t ever assume such knowledge is lost, all that is needed is to ask the right questions. We have no doubt there are such people in PNG who will know of this carving, it is all a matter of timing and during times like these we have no doubt more will be revealed very soon.