The Story of the Healer’s Axe

After the last set of articles on Original sacred rocks there were many contacts made regarding star and sacred rocks. In each case every person we spoke to shared one commonality. On every occasion bar none they all spoke of being called or guided to the rock. Bernard made the same comment and was convinced their meeting was not random, but providential. He is telling the truth as the rocks chose the finder, not the other way around.

What then is to be factored into this exchange is the type of rock that called Bernard. It is a star rock and, in that tradition, it has a thin dark coat with a lighter coloured base rock. The technology, as it is with all the star rocks, has no connection with all stick, stone and bone tool-kits. They came from ancient times before advanced technology was abandoned so that the communion with spirits and land could be re-established. The uniformly straight lines have been cut into the coat, and what some assume to be an axe blade is in pristine condition and has never chopped or made contact with any object. It is sacred ceremonial holding rock and right now is still working with Bernard. I have made it clear to Bernard that until that interaction is complete, whether he finds a local Original person to act as custodian or it joins our ensemble on country, for now that is in the future.

I have spoken to Bernard, and it is clear to me their relationship is a work in progress and needs more time. When that is complete, we have recommended to him either option but that is something he and the rock will negotiate. In the spirit of Wirritjin (Black-fella White-fella Dreaming) this fascinating rock dealing with ‘as on top’ business has more to offer and teach Bernard. It is for that reason these sacred rocks are returning all over the country, and this particular rock is a top shelf candidate, and who better than to tell its story than the person the rock personally selected to do so?

The Story of the Healer’s Axe By Bernard King

I believe it is important and timely that Australian Aboriginals be reminded of this one aspect of living culture at this time. This personal testimonial may resonate with those who feel their Aboriginal culture deeply and to those who appreciate we have vastly more than 5 senses.

When I was a kid on the outskirts of Sydney in N.S.W., I was barefoot and out in the paddock and bush nearly all the time, exploring and being in tune with nature.

An old bloke from the city decided he would grow corn on his new hobby farm in about 1970-71. I was 8 or 9 years old and decided to watch him. He didn’t know what he was doing, so he set about ploughing a topsoil/clay paddock about a foot (12 inches) deep. The paddock had not been ploughed before to my knowledge but had previously been cleared of timber and then cleared again as an orange orchard.

I saw a single object come to the surface about 40 metres away, and it ‘called me’ over. I remember feeling very weird as it dragged me by the head in a straight line to it. I picked it up and knew it was something special. It was heavy and dense like no rocks around the area. Local rocks were sandstone, with some shale and conglomerate here and there. None of the markings on the rock are from the plough, as the rock was covered in undisturbed clay.

I took it home and recognised it as an axe head. So I put it away with my handful of cherished items and have kept it since. I had a feeling not to touch it or hold it until 2021, when I had the urge to get it out and find out all about it, and to tell others. 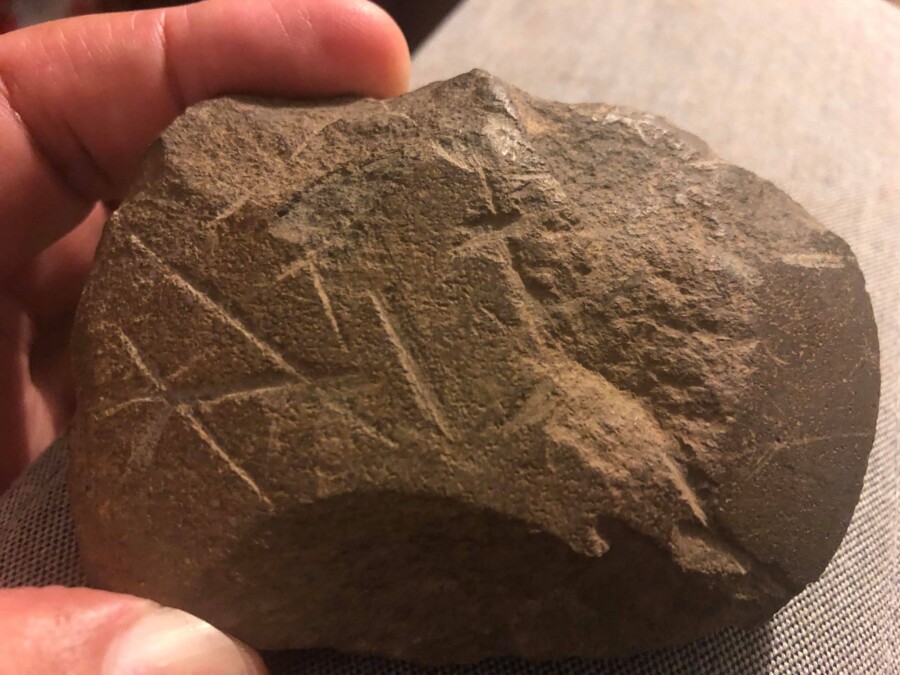 Around May 2021, I sat with it and saw an aboriginal man, alone, mature aged, extremely proud, standing tall at night with his head turned up, gazing upon the bright stars. I felt the weight of his solitary responsibility.

In ‘scanning’ for the vibration of the rock, it was surprisingly low. The energy is old, very old, sub earth surface vibe with a rumbling deep vibration. Not a colour (vibe) that modern-day humans or psychics/healers work with at all, as far as I know.

The spirit emerged from the rock and lashed out all around the house, confused, angry, frustrated, with a demeanour of ‘ready to attack’ and only needed to identify the foe. I took some persistent effort to calm it, with me projecting ‘light’ upon it and humming very deep like the deepest didgeridoo you’ve ever heard (guess: 15 to 30 Htz?). His (definitely male) mood (colour) improved dramatically, but he also reared up (lashed around) again numerous times.

Months later on (around early August 2021), I held the stone and meditated. I felt the energy climbing up my arm with strong vibration (more like an earth tremor than a tingle) until it reached my bicep, when I told him (spirit) that that was enough and I put the stone down. Since then he has been able to roam about (away from the stone), to where I do not know. I presume I unlocked it. 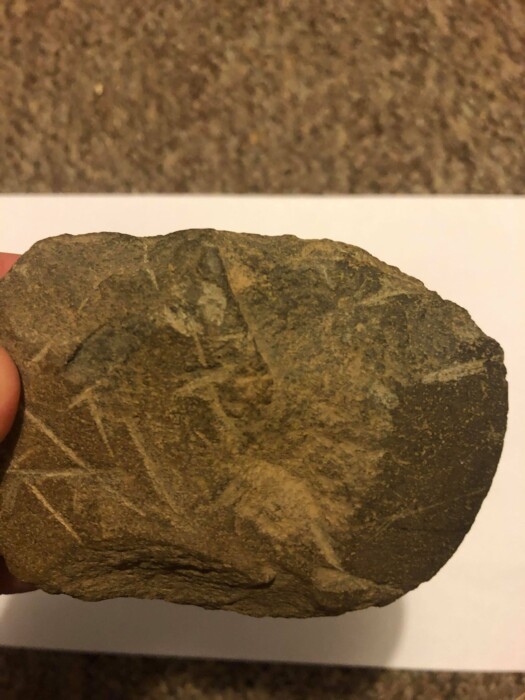 He has had a few goes at healing me. When he heals, apart from using light, he works in a light camo-green colour (like the light green colourbond fence?), working most carefully, patiently. He is fastidious and meticulous. I can see a crab kind of creature with very very long legs conducting a delicate surgery… He leaves it to continue working over a period of time. The ‘crab’ (for want of a better description) is oblivious of my energy bursts and carries on regardless, a bit like a pre-programmed robot that he leaves to ‘work on’.

The stone has spirit, he interacts with me, we ‘know’ each other. In my distant future, I sent him ‘light’ into his distant past. I have sent him light from the void twice recently by touching of our ‘foreheads’.

I presume the stone had many custodians over time, but contains an ancient active spirit. For those who are not familiar, there is an understanding that objects and places can hold ‘memory’ (psychometry). The memory may be of emotion, energy, event. That memory however is static and is accessed like a ‘playback’. This stone is completely different however; it is interactive, responsive and contains an entity. This is the first object I have encountered to be ‘active’. 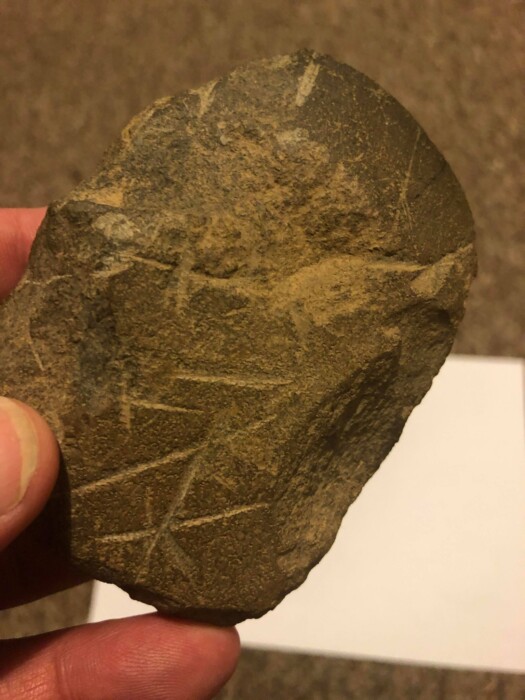 A psychic told me it is not an axe, it is the healer’s (not A healer, THE healer’s), who works with his ‘light-givers’. Both psychics declined to touch it. I observed that they continued to move further away from me as they spoke.

Aboriginal healers told me it is a map to navigate by the night sky. As for healing; The lightning markings indicate that lightning is the source of healing power, which is then pushed (concentrated) to the belly of the kangaroo, which allows the power then to be aimed through the sharpened edge. I note there are ‘thumbholds’ too. A distinct one for the right thumb and possibly also a secondary one on the left to accommodate both hands being used (I’m not positive about that left thumb theory).

The sharpened edge is lovely and appears never to have been used to strike anything (see pics). 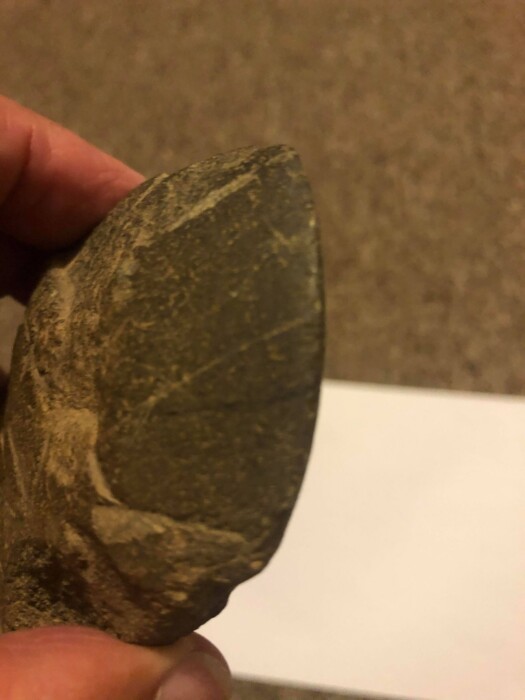 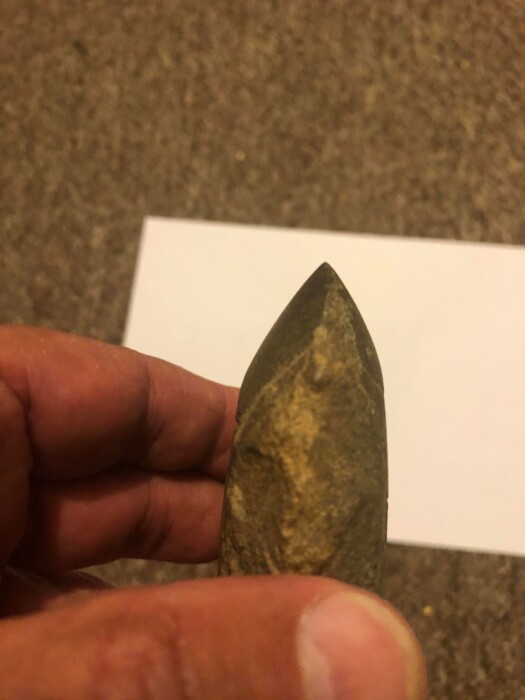 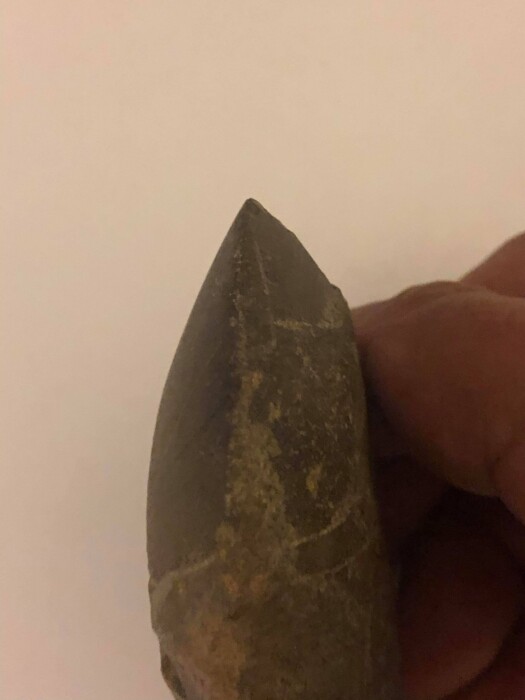 On the third occasion I sat with the stone (early September 2021), it hummed quietly and the active spirit was away. I scanned for him and found him with the light (up high, not low as before), separately and distinguishable as Spirit and the light. They were connecting and no room was made for me to participate in that interaction. Spirit now has its own permanent connection direct to the light. A ‘collaboration’, not a merger. I wonder if the spirit’s ‘ascension’ was the purpose.

On 20 September 2021, I was satisfied that Spirit was now connected to the light and so told Spirit I would now be open to him. 10 minutes later I was blasted with energy and had to pull the car over for 20 minutes. I saw a figure for light, the Spirit in the front of the light (the foreground), with the darker earthy aspect travelling all through me and ‘inspecting’ and ‘manipulating’ (healing). It was a rough ride (throat coughing, some spasms) but I remained open. I felt him adjusting/examining various parts of me. My back unlocked and knee pain disappeared and I felt good, but then needed a nap when I got home.

In late October 2021, I again allowed connection with the stone. On this occasion there was ample vibration but was quite pleasant. It appears the ‘bedside manner’ has been substantially improved. 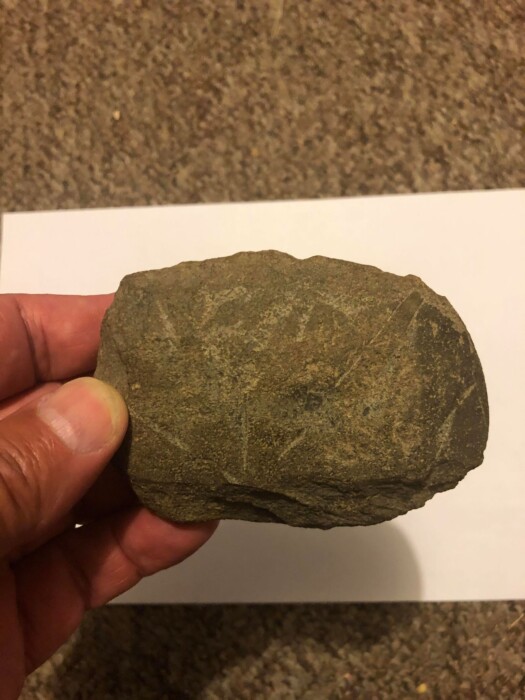 There is no doubt that the Spirit of the stone intends to heal. That is this Spirit’s purpose. Spirit now has access to unlimited energy and is willing to get to work. If he is busy anywhere else right now, I don’t know. I have contacted a local indigenous healer and requested to accompany them in the near future to healings for individuals or groups. We will see whether that is something he wants to do…

The stone is up to 60,000 years old. I do not believe spirit necessarily has to be triggered by the axe directly anymore, but I remain open minded as to whether the axe is a way to make an ‘introduction’ to the correct frequency. 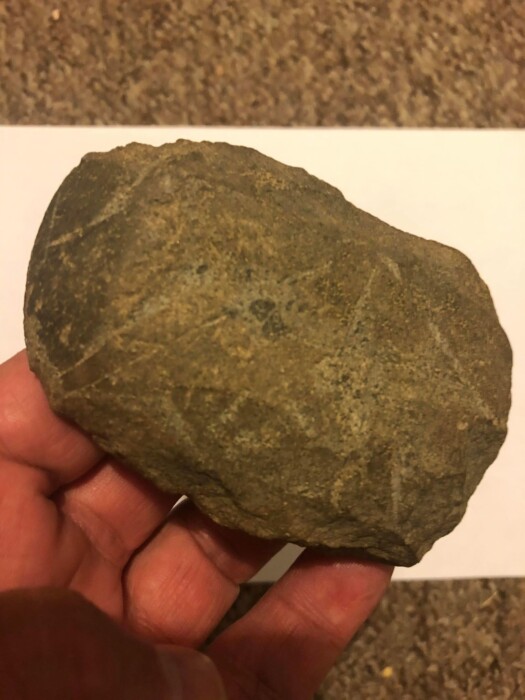 My conclusion is that the Spirit is a travelling psychic surgeon, a specialist not a generalist. He has imperfect bedside manner. His ‘span’ of vibe is 85% centrally focussed on the matter at hand (manipulation of the physical), with the remaining 15% at the periphery of the vibe being impatient, strict and even aggressive… I expect that throughout ancient times the Aboriginal man who was custodian must have carefully chosen and trained his apprentice each time, down through the eons.

Why did he want me to wait 50 years?  Why 2021? I remain custodian and protector of the stone until Spirit tells me otherwise. I am engaged in identifying opportunities for the Spirit to actively heal Aboriginals, as the best way I can think of to keep Spirit alive in current culture. My as-yet untested theory is that spirit will recognise Aboriginal DNA and be more effective in healing Aboriginals than for others. If the ‘spirit’ does not engage, it may be sufficient (or actually the point) that he has been connected to the light and has ascended somewhat. Time will tell.

p.s. I have taken some advice on 29 November 2021 about the appropriate ceremony and will conduct that exactly to specifications.