A recent article written by Paul Daley (Guardian Australia) is so sensational in its implications that we feel his opening banner of “A big jump: People might have lived in Australia twice as long as we thought,” is no less than a very conservative observation of a site that changes literally everything we claim to know about human evolution. His report on the research of noted Australian archaeologist, Jim Bowler, was centred upon the second announcement. Bowler’s findings, in relation to the archaeology and dates coming out of shell middens found beside a sea-side cliff at Moyjil (Point Ritchie, Victoria), in particular, the compelling evidence supporting the presence of human activity at this beach 120,000 years ago, creates a sea of “contentious potential implications.”(1)

That minimum date of occupation is, as Daley noted, “twice as long as the broadly accepted period of human continental habitation.”(2) And in what only adds to real chance the minimum date of occupation in Victoria is at least 120,000 years, it not the first time a date from this site has ‘upset the applecart.’ Less than three years, earlier Bowler was literally spruking the same line and close to the same date. As it was with the latest analysis, they also examined and dated the contents of another shell midden and came up with a date of between 80,000 to 90,000 years, with the chances high it is indeed the older date that applies. Bowler was adamant the science applied was of the highest calibre, and it is this time around, but added a note of caution in confiding he wasn’t fully convinced until a corroborating date came onto the scene.

Well now it has, and it is all at his instigation, and strangely enough the confirmation he sought already happened over thirty years earlier. It was 1982 to be exact. and thirty-five years if counting. Bowler, along with Peter Ouwendyk and Gurdup Singh, Australia’s foremost expert on analysing and dating core samples, signed off on a date of 186,000 years. The core sample extracted from the Great Barrier Reef, showed that a massive increase in charcoal appeared from that date and continued on until the land was submerged. They correctly put this marked increase down to human involvement through ‘firestick farming.’

At that time such an incredibly inconvenient date would not be hard to forget or misplace, even more so when factoring in the research Singh conducted on a core analysis at Lake George (NSW). The repetition of six figures (126,000 years) was a ‘wilful beast’ if allowed to be openly discussed, so was apparently given the same credence as the Great Barrier Reef date, none.

The ‘Elephant’ in the Room

As a child the textbooks told me that the Original people had been in Australia for 20,000 years, then it grew and found a home, Africa. Soon after the tee-shirts proclaimed a 40,000-year tenure, and since then it has crept up in increments of five thousand years assumedly peaking at 65,000 years when arriving on the northern shores of Australia, via Africa. Now we have a date of 120,000 years, but that is misleading.

To begin with, it is merely a minimum date. There are hints of greater antiquity yet to come. Of more importance is the geography. Located at the southern extremity of the present-day Australian continent, if the first humans did settle from Africa, there is an agreed dispersal rate if sourced from a few African mariners primarily versed in knowledge and survival through the sea. It is assumed that the site where Bowler is getting these dates, took around 20,000 years to reach from the supposed first northern settlement point. That means if Australia was peopled from Africa via the Top End, they came at least 140,000 years ago.

The problem with such a date is that no scholar or archaeologist has proposed any six-figured exit, nor could they envisage a reason why any African would leave their home base so long ago. These dates, and at least eight others already known, completely contradict the Out-of-Africa and into Australia theory. If Bowler’s date is correct then the theory is, as John Cleese remarked some time ago, “a dead parrot.” Yes, it was nailed to the perch and kept upright, but the theory was ailing for some time and was already nigh on terminal. Now with these two dates announced by a staunch advocate of the Out-of-Africa theory, all that is left is to assess their work and science. And if it ‘scrubs up well,’ a tick is given to Moyjil and a cross to Africa. There is no other way to mark these papers.

Reading the Lines and in Between

“Thermal luminescence analyses of blackened stones provided ages in the … range … 100-130 ka [thousand years], consistent with independent stratigraphic evidence and contemporaneous with the age of the surface in which they lie. The distribution of fire-darkened stones is inconsistent with wildfire effects. Two hearth-like features closely associated with disconformity provide further indication of human agency. The data are consistent with the suggestion of human presence at Warrnambool during the last Interglacial.”(3)

Bowler was fully aware of the “scepticism of others,”(4) if for no other reason that he was one of the most vocal nay-sayers, but equally, he was also convinced that if the date “was 60,000 years, readers would have no doubt it was people.”(5) As to where Bowler now stands after the science at Moyjil is in, with three separate measurements aligned, he had no choice but to concede that “for my part, I am convinced.”(6)

From the researcher’s viewpoint, the only point of contention relates to whether the number and positioning of these “blackened stones”(7) constitutes a “designated “place of fire”.”(8) While admitting that “the validity of the human connotation of ‘fireplace’ remains to be established,” they hastened to add that the “evidence is consistent with the features being a substantial ‘place of fire.’”(9) Despite the aversion of all archaeologist to be bold in this country, their collective conclusion, “based on 11 years of research,”(10) is “that the blackened stones were collected and heated in a situation reminiscent of a hearth.”(11)

At the very least there is proof of occupation by the sea beside a cliff, dating back to no less than 120,000 years. More than likely this is accompanied by a formalised communal cooking arrangement of hearths, the only part of this story and archaeology not included are the actual participants, everything but who is on display at this site.

When, Where and What is Here, but not Who

Sharing, co-operative ventures with fire and food, and an advanced ‘human’ presence can be ticked off, but not so when dealing with who. We would need a skull near the middens by the cliff to add more to this narrative and alas, that seminal piece of genetic evidence was not found, there. But not far away, in the same state, besides the beach and underneath a steep cliff, a skull has been found that looks incredibly ancient, and ever so alien-like in appearance.

If this site is legitimate, then all that is left over in the Out-of-Africa theory, is Africans turning up on this continent when modern humans or beings were already here for some time, at best. The more likely scenario is that no Africans ever came to Australia and it was ancient Australians who first set foot on other continents, way back. That’s it! There is no third option, it is either or, with a high probability of or. The Australian no-forehead skulls are in no way related to any African sapiens, or for that matter, any type of sapiens. Their faces and physiology are so different from all hominids, past or present, yet this species is far more intelligent than we are, incredibly ancient and belongs solely to this continent. Could this species, of which the Victorian seaside individual may have been buried in the cliff-face above where it fell, be same beings detected at Moyjil?

When we first began prosecuting the belief that humanity began in Australia in our first book, Constructing a New World Map, which was published in 2008, not one academic made a public statement in our defence. Plenty attacked us, with vigour, but nothing was said in support. Just over ten years further on, Jim Bowler can only find evidence that is in total agreement with our belief that the Out-of-Africa theory can now be officially declared a “dead parrot.” 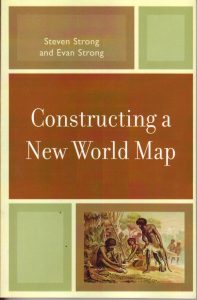