Looking Outside the Bucket 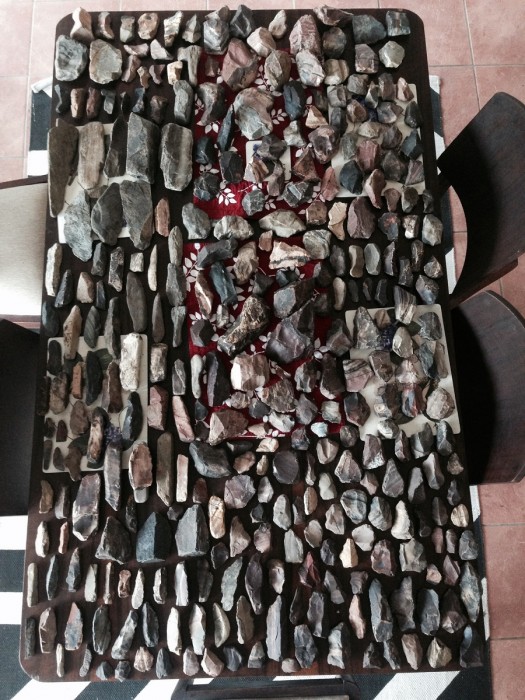 Looking Outside the Bucket

Cade was always respectful towards Original culture, but until very recent times he knew little of the intricacies, details and protocol. That all changed one day when working in the nursery, he heard some noise and a lot of activity down by the creek.

Cade wandered down to find out what was going on, and there in front of him was a male with a bucket full of stones. As this person was on private property and certainly unannounced, Cade asked him what he was doing. His explanation, although couched in terms of him being the head of a faculty at the local university that focuses on Original artefacts, may well have introduced his credentials, but his lack of courtesy in not asking for permission was still unforgivable. At that stage, Cade felt that since this person was a self-proclaimed expert, he assumed that gave him the right to do as he wished. So when he asked if the contents of the bucket could be taken back to the University for further study, Cade saw no reason to disagree. Especially since the same academic made special mention of the unparalleled of quantity of stone artefacts in front of him and the importance of this site.

With his curiosity stirred by this unexpected encounter, Cade made further contact with the academic as to what these further investigations revealed. He was somewhat confused, and more than a touch disappointed when in conversation with this academic. Basically the tired old mantra of ‘nothing to see here’ was trotted out, all of the markings were claimed to be random and nothing on display was worthy of further examination. The only positive that came out of this first exchange was the time Cade spent with this academic. He was shown the many reasons why these rocks down by the creek displayed clear evidence of Original involvement through flaking, formed edges, shaping etc. From that brief introduction Cade wanted more, quickly, and sought out every available source in understanding the many ways rocks of this place were used in ancient times. It was very obvious when I first met Cade that his Old Way knowledge of rocks, handling and sensing their inner presence was refined and empathetic.

And so ended that brief diversion and eventual denial, or so it seemed, but not that long after while working at the nursery, once again Cade could hear noise and movement down by the creek. But this time it seemed louder and more concentrated.

It wasn’t just one uninvited archaeologist in collection, but seven. And this time around Cade was more aware of the correct rules of engagement. All seven students came from the same University as the academic, and what was undeniable was that they were sent by the same person who insisted there was nothing of authenticity. That denial was obviously a lie, the recurring truth in attendance was that these students were directed to sneak on to the site and steal Original artefacts without seeking permission from the owner of the land or the relevant tribal custodians. They were told to move on and never to return. In the interim all Cade knew for sure was that lies were told and these people were directed to steal Original artefacts that deserved immediate protection.

There was only ever one proper course of action available from the beginning, but being aware of the proper procedure is a very difficult task. Nevertheless, in Cade’s case his empathy and deep contact with these rocks meant he would find the right path. Soon after the right keepers of Original Lore and Culture were in contact with Cade, and this report is part of what was determined to be the right course of action that has evolved into a formal agreement on bark testifying to a shared custodianship between the present-day landholders and Original representatives of protocol. My brief is ever so easy, all that is needed is to establish that there is undeniable evidence of significant Original occupation.

The first part of this investigation requires little beyond observing the obvious. The photographs of the worked rocks replete with percussion bulbs left no doubt that many of these artefacts were nearly completed and almost ready to be used, before a fault or imperfection was apparent and discarded for a better prospect. It was enough today to examine the contents of two buckets and visit a fascinating Original occupation site that did have me stumped for a while as to what was the purpose.

Looking Inside the Buckets 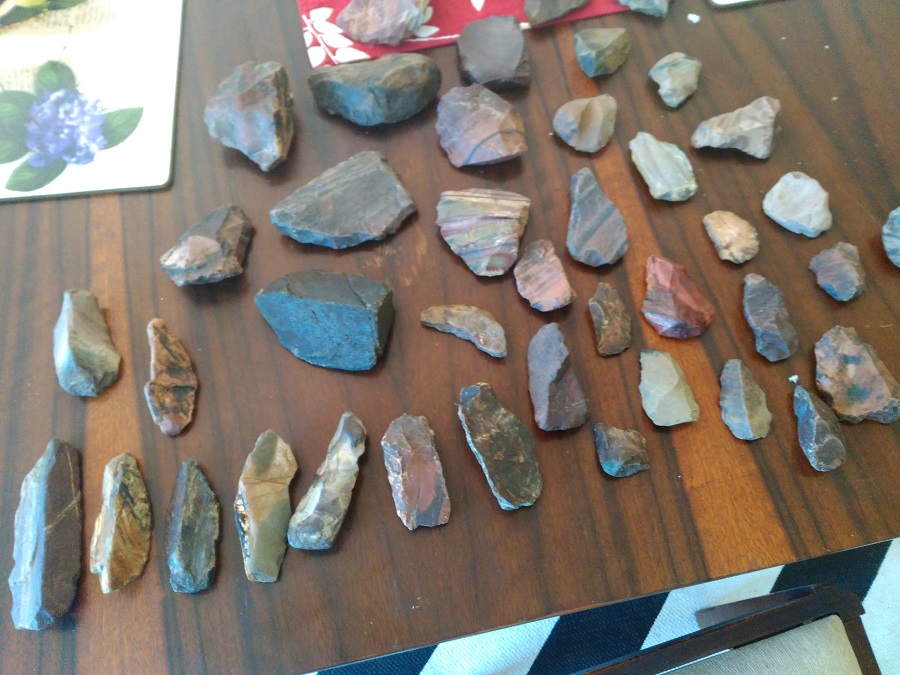 There were hundreds of rocks, far too many to examine individually and more than sufficient in establishing authenticity. The mere mention that these rocks are the outcome of random impact whilst tumbling down a creek is as ‘cringeworthy’ as it is symptomatic. Many of these rocks were almost complete, with a clean row of percussion bulbs running along one edge. Over half a dozen bulbs in one continuous line could have happened once, but the two buckets have dozens of rocks that were so close to being a final product. Often a fault line was revealed, on some occasions the hammerstone missed its mark and created too much collateral damage to be reworked. What is undeniable is that these rocks were worked and shaped to varying stages, any other consideration just isn’t worth canvassing.

That repeated truth is the only reason why seven university students were sent to sort and collect, whilst lacking in any respect. The photographs of the rocks supplied by Cade only reinforce that fact, but what was particularly interesting was that within this ensemble were no less than three rocks that extend well past two buckets of discards.

And that is the crucial point, any shaped stone artefact found in Australia is supposedly to be the by-product of a stone, bone and stick tool-kit. Therefore, when working on any hard rock through either engraving or breaking, this must come about through the use of a stone chisel, hammer or point, and in every case that impact leaves a residual curved bulb in the rock. That imprint is quite common here, but certainly not the norm. 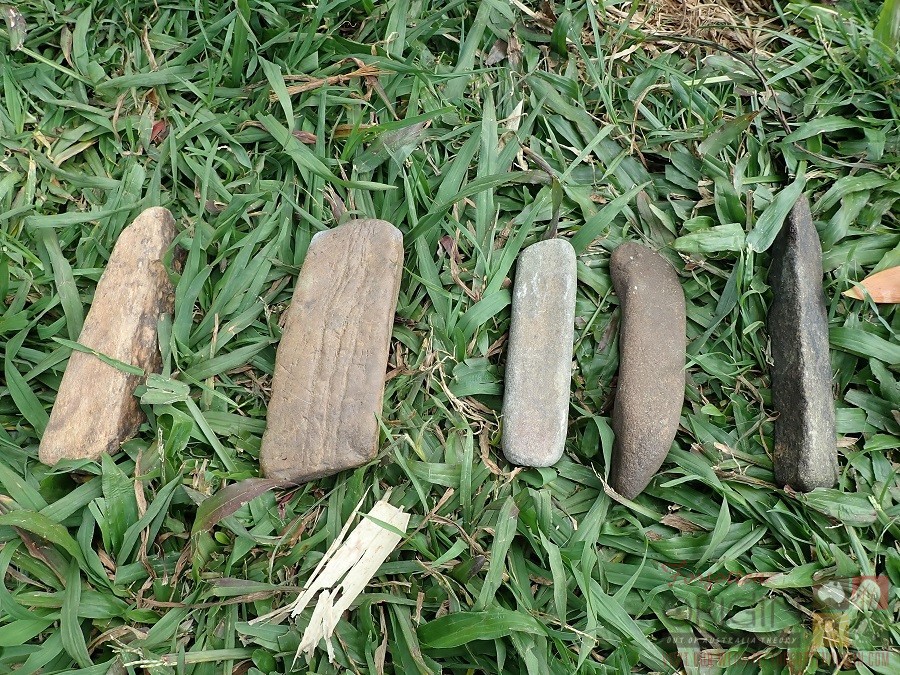 At first inspection, which was far too brief, there are three definite candidates that are both artificial and totally lacking in any sign of rock on rock impact points. One other is nigh on a 100% chance it was certainly reshaped by human hands using technology far too advanced to fit into any conventional account of Original pre-history, and the other two warrant further thought and consideration. The three beyond question are not tools, there is no point, blade or abraded edge and no role in food gathering or hunting. One strongly resembles a magic cylcon, with a rounded shape, a bulbous section that rests on the palm and an extended rounded point of exit. We suspect that the triangular pointing rock performs a similar mystical role, but are less certain as to how the third rock functions.

What these rocks do in combination is to open this site up to many levels, it is not just a tool-making taking place, as there is firm evidence of mystical artefacts on location that expands the overall backdrop. For now, the presence of these sacred shaped rocks, with the promise from Cade of other rocks of the same construction, is sufficient in establishing that more than one type of activity was taking place.

Up the Hill Backwards

Cade was very keen to take us up to a “cave.” Past that general description, it was decidedly vague. I had a vision of something quite expansive with perhaps large galleries and maybe even some ochre on the walls. From that vantage point what we finally saw was on a much smaller scale and somewhat sparse in content. But one thing we have learnt when on country, is that first impressions are often deceptive. 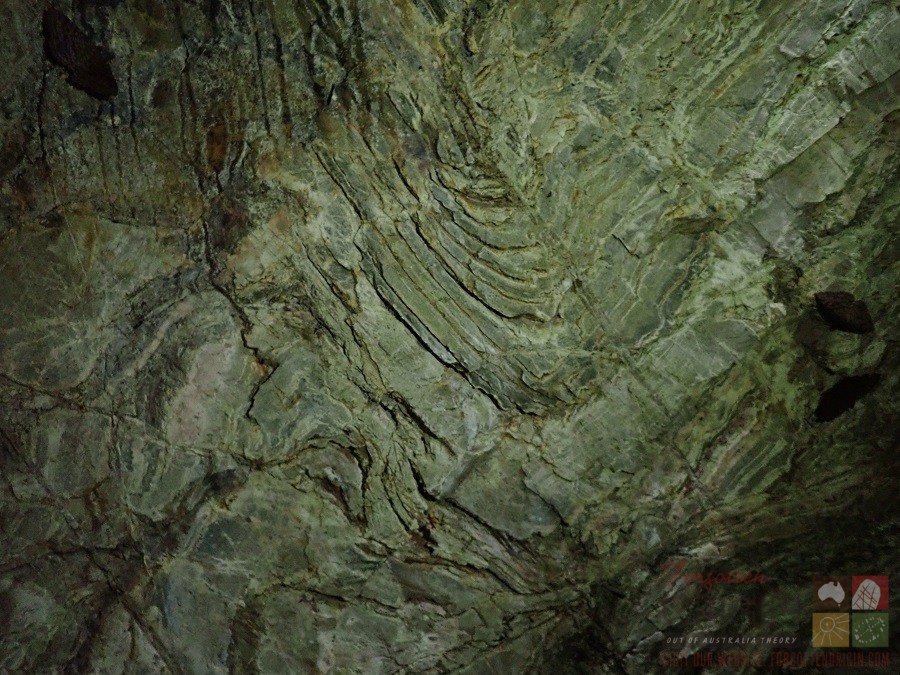 The cave is more a drop in rocks with a roof ceiling which seems entirely natural in formation. Once inside, there was nothing grand or imposing within, it was close to cramped, and at best three would be close to a crowd. Undeniably it had been used in some manner. Two flakes on the floor was ample proof of use, as was the residue of charcoal and smoke. The chances are reasonable a set of engravings on one boulder that seem to run in opposite directions, is also evidence of Original hands. The evidence of Original attendance was clear, but when it came to specifics I was unable to see a solution. Fortunately Githabul Elder, Rob Williams, was also part of the party and all of the solution.

It was, according to Rob, “a counselling room,” a place where young men could be taken aside for guidance with some gentle reminders given in private. This was what this site functioned as when protocol and Old Way Lore was in control. Until now, such a place was unknown to me, but now inside and aware of what and who, it all made perfect sense.

At this preliminary state of affairs, we are confident that three different types of activities were part of this site: tool-making, sacred ceremonies and initiation/guidance for the younger members of the tribe. As a general overview this part of our assignment is done, but next up a much closer inspection of the actual site the head academic and his students were so keen to examine and so willing to break so many levels of protocol is essential. Lauded for the quantity and quality on offer, there is so much more to a site that is not only unprotected, but its immediate future is under threat and needs to be resolved as soon as possible, if not sooner.